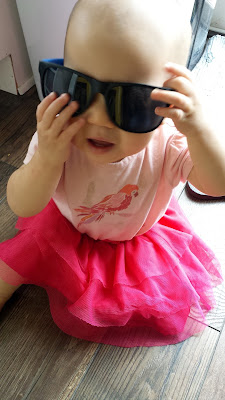 Daisy turned the big 1 on July 21.  She also decided that, being the ripe old age of one, she should start walking.  So she took her first real steps on her birthday.  She loved her birthday presents (a wacky rattle-like toy from us, a plush kitty from Poh-Poh, and a stuffed animal/egg/basket set from Grandma Coco) and played with them all day. 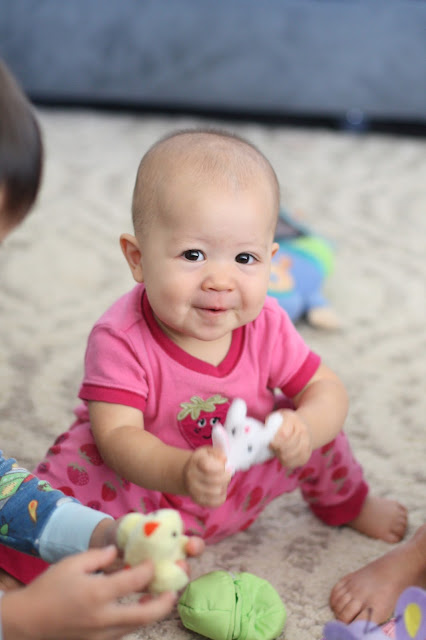 I made her birthday cake during her nap: coconut cake with passion fruit curd filling and coconut Swiss meringue buttercream frosting.  I really like how it turned out. 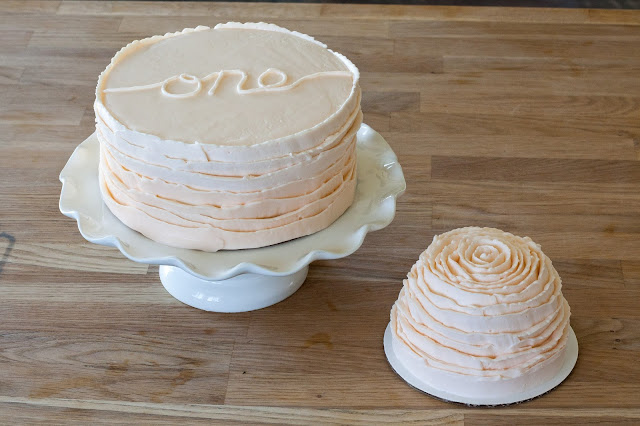 After her favorite dinner of scrambled eggs, biscuits, and smoothies, it was cake time!  We gave her the smash cake to play with on the floor, but it didn't go exactly as planned.  We had to hold her back while we sang "Happy Birthday" to her. 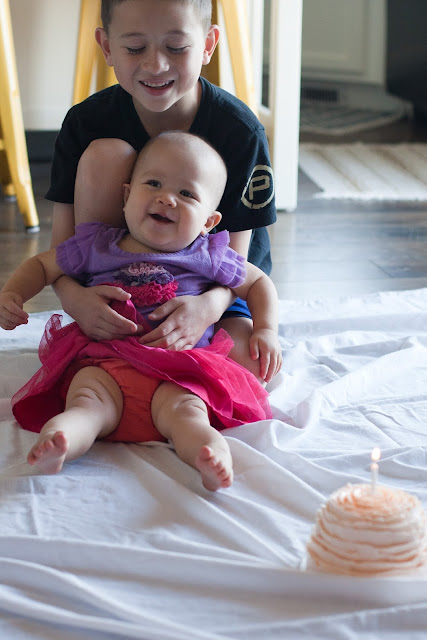 Then we released her for the smashing! First she sized up the cake. 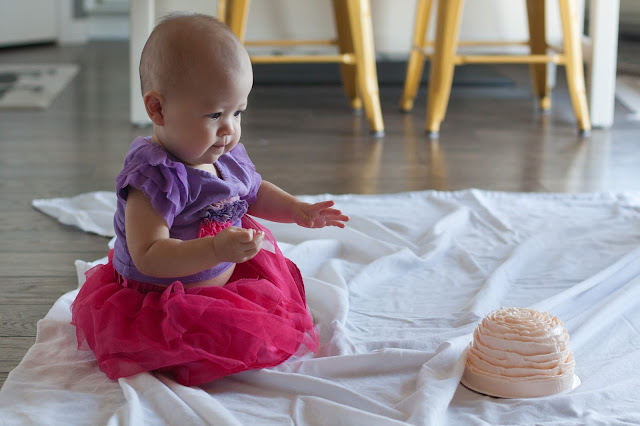 She looked at us as if to ask what on earth she was supposed to do with this thing. 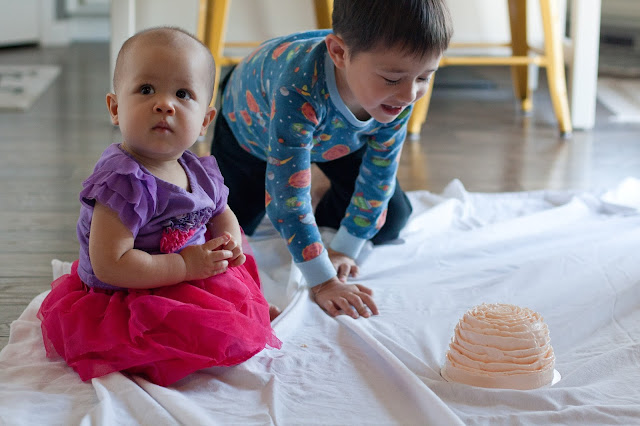 After lots of encouragement she gave it a tentative poke (and immediately wiped off the frosting)... 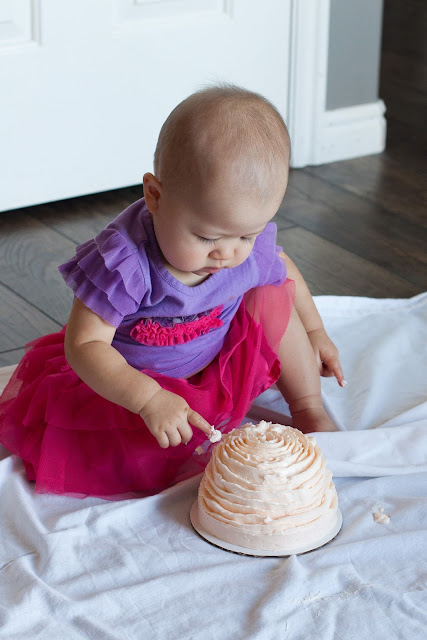 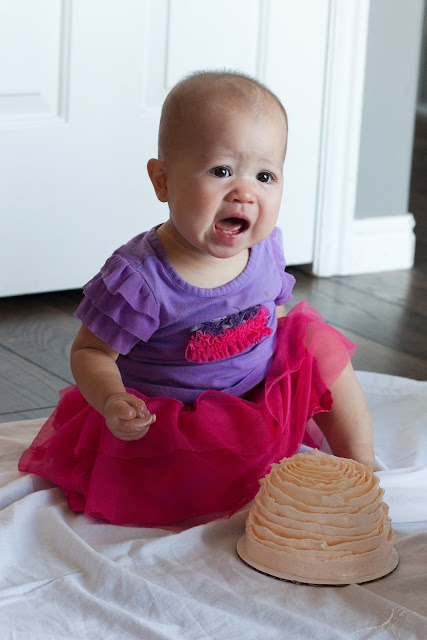 That is, until we put her in her high chair and handed her a spoon! 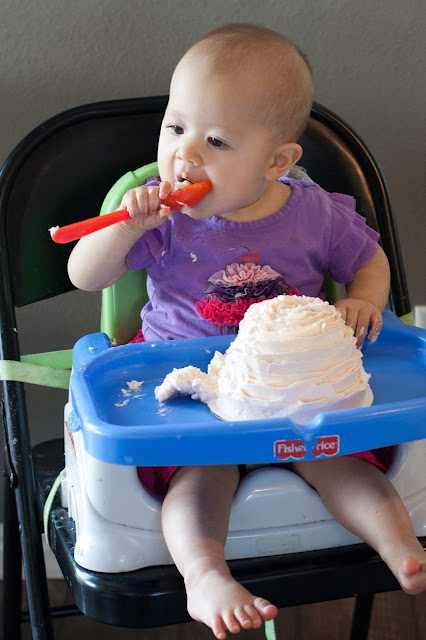 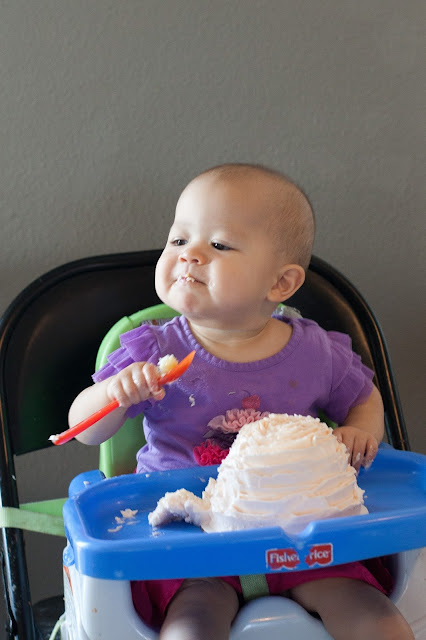 Happy birthday, Daisy!  Here are some of Daisy highlights:
* Everyone loves her.  Seriously, everyone.  Her siblings are always happy to play with her, probably because she's so interactive and fun to play with. 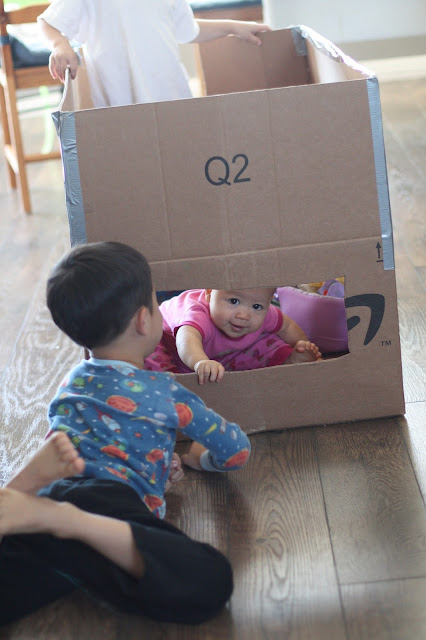 * Grunts like a pig.  She doesn't snort, she grunts with her mouth closed.  Exactly like a pig.  And she does it all the time.
* Her first word is "car," but it sounds remarkably like the way Sammy used to say "star" when he was 18 months.
* At the time of her birthday she would answer "Knock-knock" with "ya-ya" in the same tone as "who's there?"
* She now echoes "ya-ya" in a Marco-Polo-esque version of hide-and-seek.
* Almost as soon as she learned to walk she was climbing our stairs.  She fell a couple times in the beginning and has now learned to hang out on the first landing until someone comes to escort her the rest of the way up.  If we take too long, she just goes up by herself anyway.
* She takes eating very seriously.  If she isn't getting enough food in her fast enough she starts shrieking bloody murder until there's more food.  Favorite foods: Cheese (her second word is "cheese," which sounds like "EEEEEEEEse!"), all berries, scrambled eggs, toast, and cereal with milk. 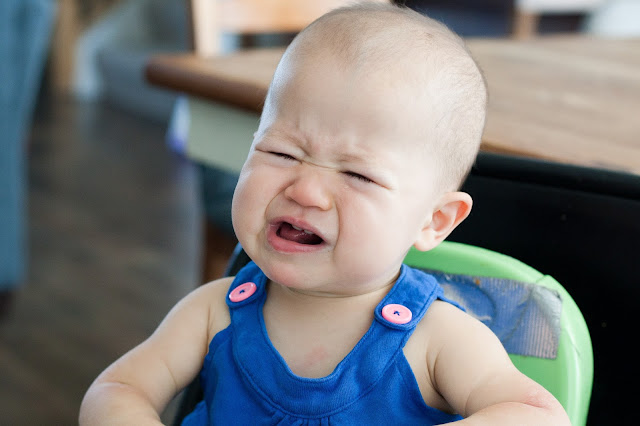 * Has 2 top teeth and 4 bottom teeth.
* Officially stopped nursing cold turkey on August 8.  She went from nursing throughout the day and night to nothing ever again.  She bit me while nursing that afternoon, so I very gently told her "No," which made her cry the cry of a thousand betrayals, and she has flat out refused to nurse ever since - just turned her head away when I would offer her the breast.  Sometimes I would catch her off-guard and she would almost nurse, but then she would suddenly remember and turn away.  This leads me to...
* She sleeps through the night now!!!  Again, she went from waking up 4-6 times each night, refusing to go back to sleep without nursing each time, to waking up a couple of times during her impromptu nursing boycott, to sleeping solid through the night (once she realized she wasn't going to nurse back to sleep, I guess she figured it was pointless to keep waking up).  Hallelujah!
* We recently gave her a Glowworm toy in her crib to help ease the transition to sleeping, and she loves it.  We hear that thing playing its lullabies on repeat until she falls asleep, then again once she wakes up.  Sometimes it keeps her happy in her crib for half an hour!
* Her siblings have conned her into pushing them around on her push car since before she could even walk on her own.  She loved doing it and they got a free ride.  This week she figured out how to sit on the thing, so the tables are turned and they have to push her around. 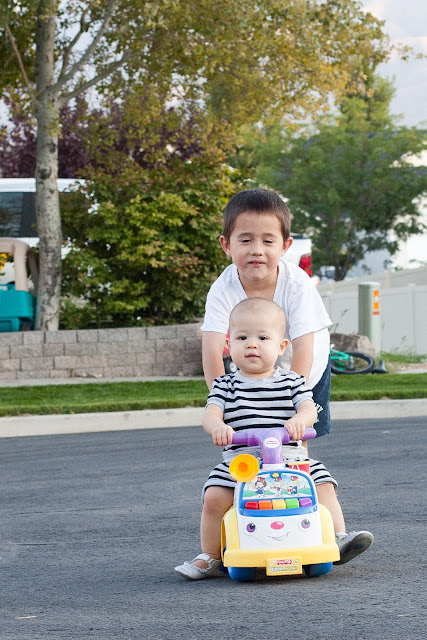 * She LOVES to dance!  Any time there's music (even if you're just singing) she starts to dance.  Her sweet moves include twisting her upper body and swinging her arms, and quick-squats.  She pushes the buttons on her musical toys over and over just so she can have her own dance parties.
* She's a mama's girl for sure, but as long as I'm holding her or otherwise touching her she is the most social baby we've had.
* Her love of Peek-A-Boo knows no bounds.  She has also mastered the art of the goodbye wave and blowing kisses.  She claps a lot.  She likes to enthusiastically rub her own head, probably because her peach fuzz is finally starting to come in.
* Today (we're at the end of August now) she brought her shoes to me for the first time, then plopped down and stuck her foot out for me to put them on.  Once I did, she headed straight for the front door and stood there looking at me expectantly until I took her outside.  She loves it out there.