May 25 was the last day of school.  Samuel graduated kindergarten the day before.  There was a nice little ceremony and Sammy just loved it.  Then later that day we harvested the very first strawberries from our garden!  It was glorious! 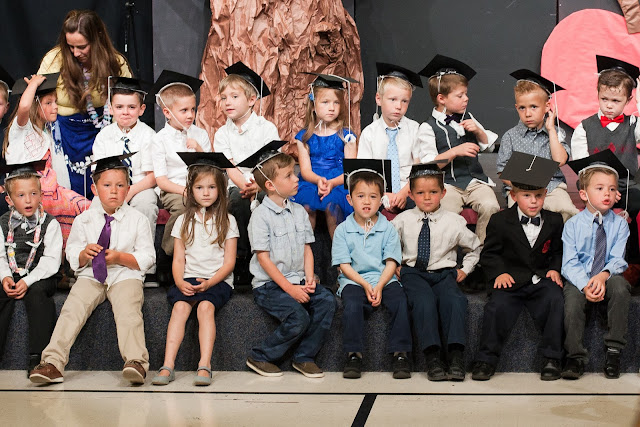 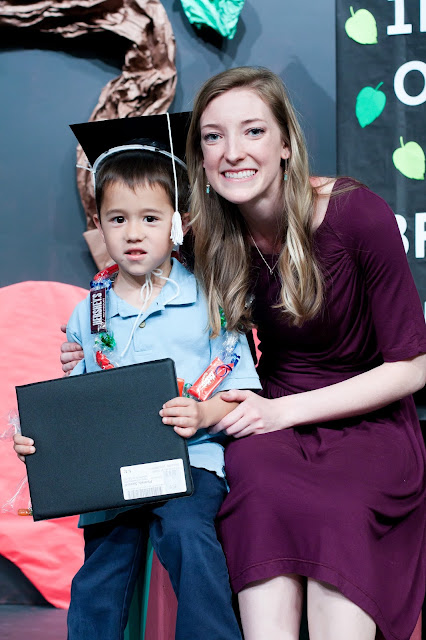 This picture isn't our first harvest (it was taken a couple days ago) but we needed to show off our strawberries.  So much better when they're from your own garden. 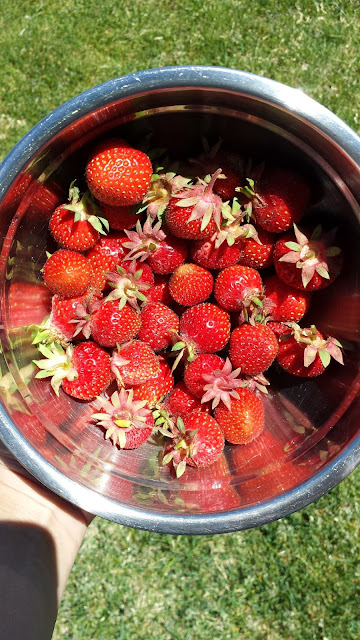 On Friday May 27 we drove down to Cedar City to stay at the Tkochs' cabin.  This time we didn't spend the whole time lounging around.  We got out!  We were active!  We grabbed the bull by the horns!  On Saturday we went swimming at the Cedar City pool and then went to our new favorite Cedar City restaurant: Centro Wood-fired Pizzeria.  It was some of the best pizza we've ever had!  And silly us we took no pictures.  But it's well worth the visit.  It's at 50 W Center Street (near the corner of Center and Main).

We saw lots of deer while we were up there.   I think at one time we saw nine all at once in the backyard.  Here's a pic with six of them (one is hidden in the bushes on the far right): 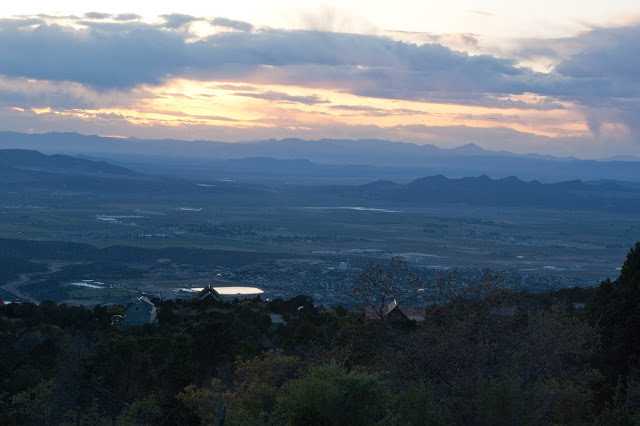 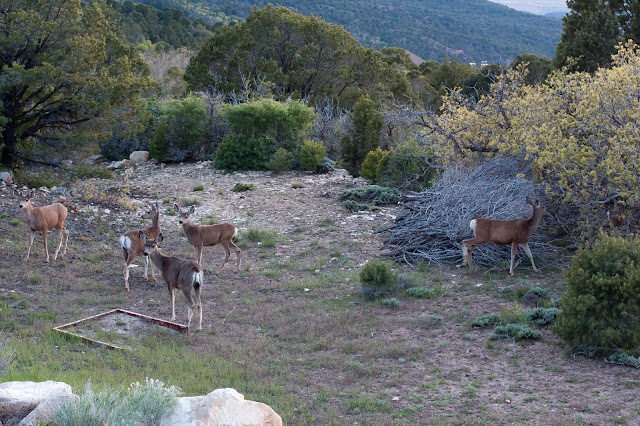 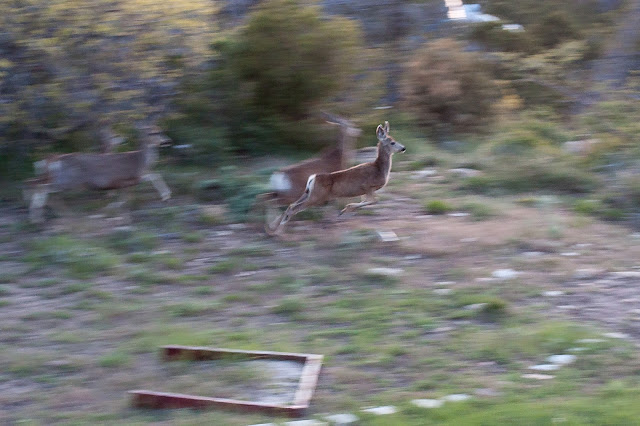 On Sunday we drove over to Zion's National Park.  Silly us we decided to go on Memorial Day weekend and it took over an hour to actually get in the park but it was worth it.  At Zion's if you want to go on any hikes you have to take a shuttle in from town - the main road is blocked off to outside traffic.  So after waiting in a long line in the heat we were off on the 40-minute shuttle drive up the canyon to the hike that begins "The Narrows" - one of the most popular hikes in Utah.  The boys fell asleep on the way up but the girls did great. 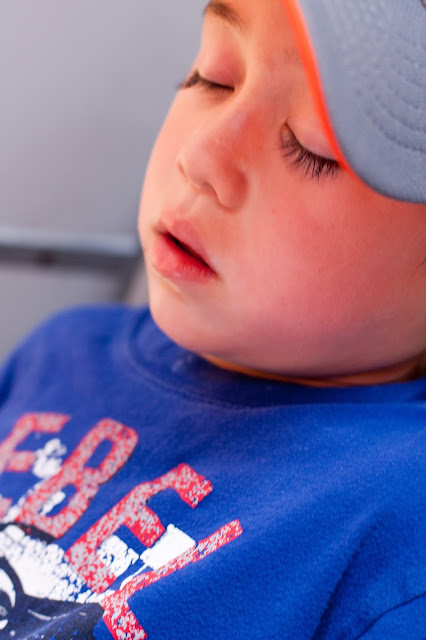 After arriving there's about a 1-mile hike to get to the spot where the Narrows begins.  We finally got to use the old hiking baby-carrier that we got for free many years ago.  Daisy loved it. 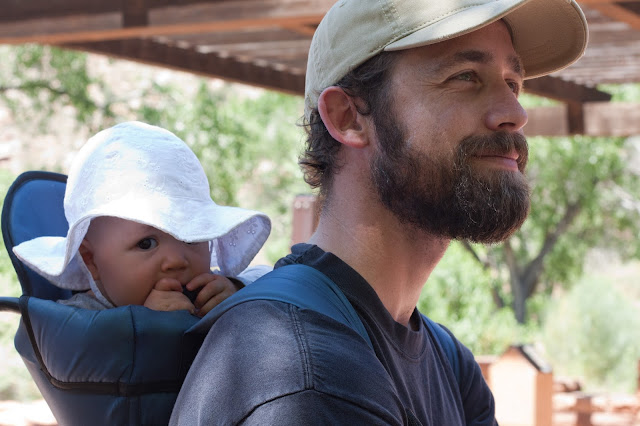 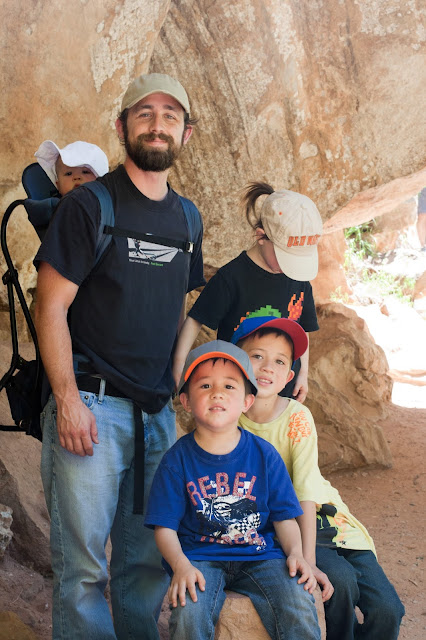 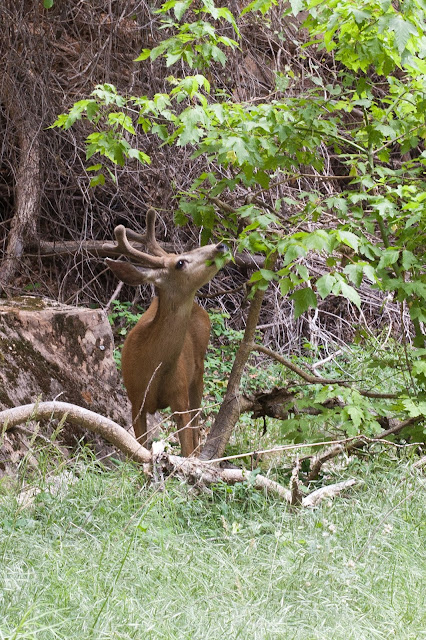 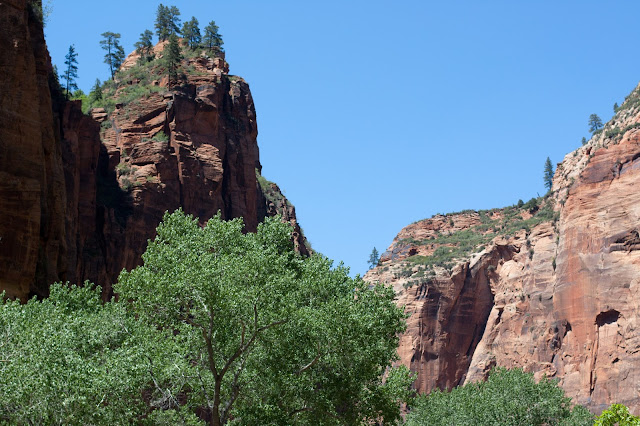 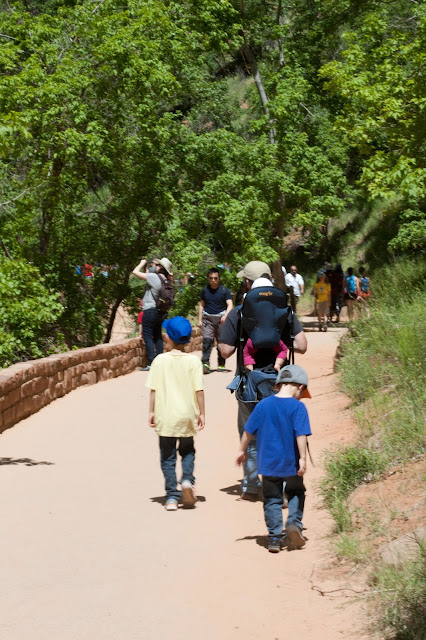 After a long trek in the heat we arrived at a nice shady oasis on the river where people generally begin their hike up the Narrows. 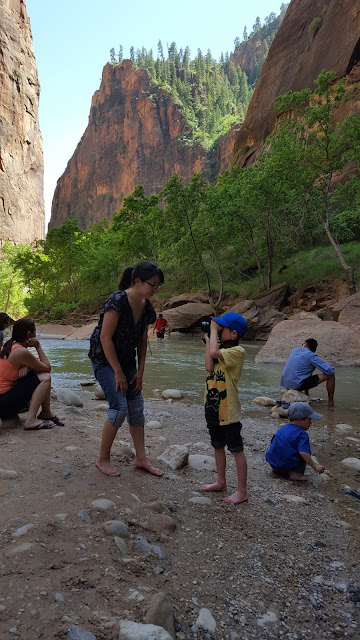 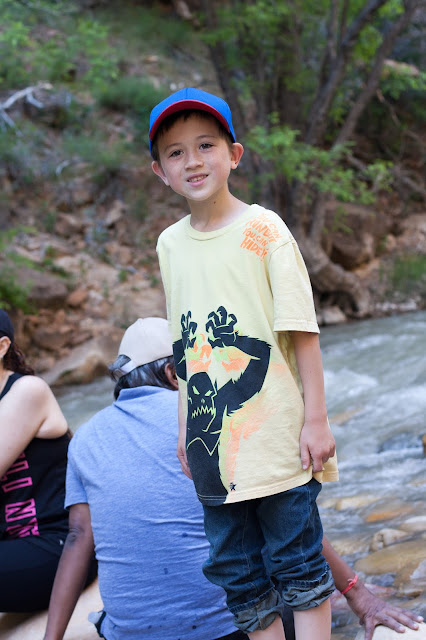 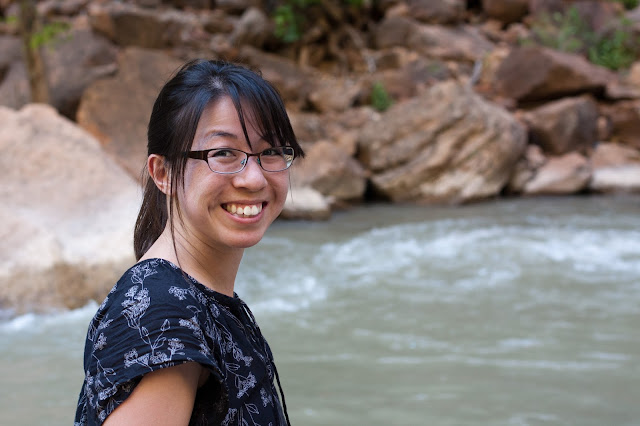 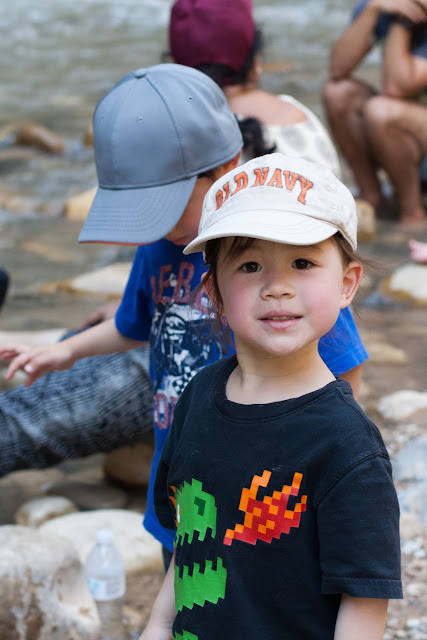 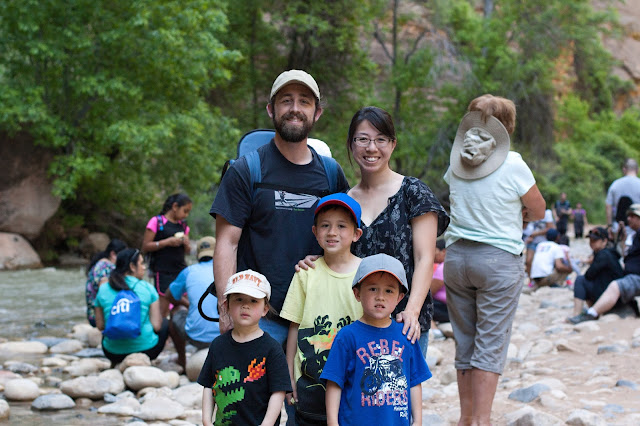 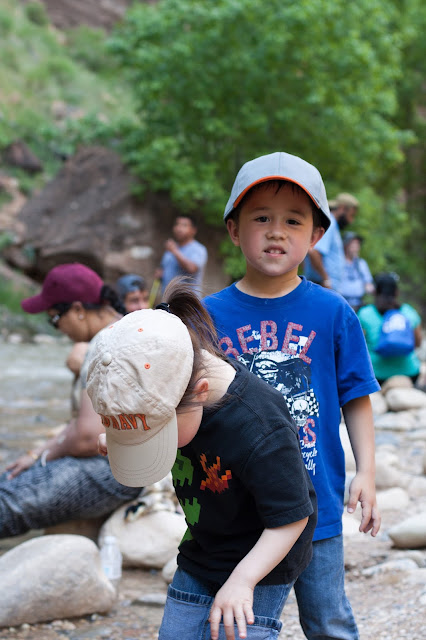 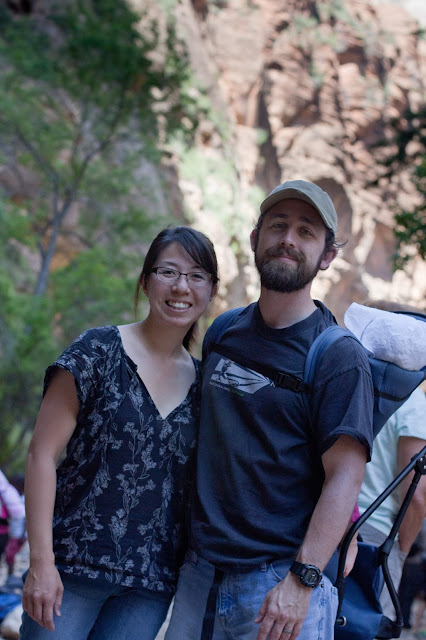 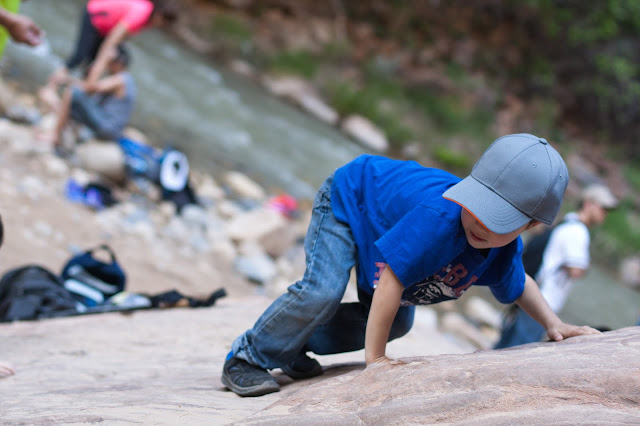 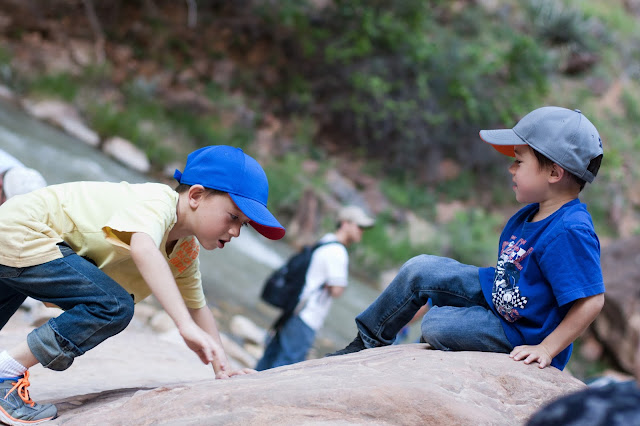 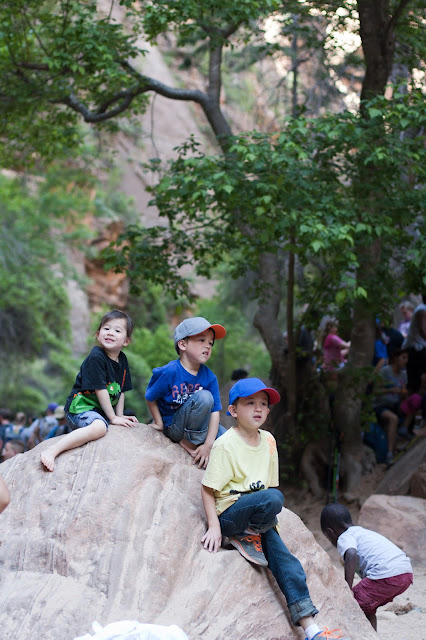 We drove back home on Memorial Day and left early enough to beat the traffic.  It was a nice drive, the kids did pretty well, and we had a wonderful weekend.  We're on the fence about taking Daisy on longer road-trips.  She did okay but we definitely had to make a lunch stop and get out of the van for a bit in order to stop her screaming.

Last week we noticed that there was a snake in our chicken coop - it appeared to be a "Western Yellow-bellied Racer".  It didn't harm the chickens and the chickens just kind of stayed away from it.  I decided to leave it in there on the off-chance it might prevent mice from getting in but it ended up finding a way out. Maxine named it "Charlton Hisston". 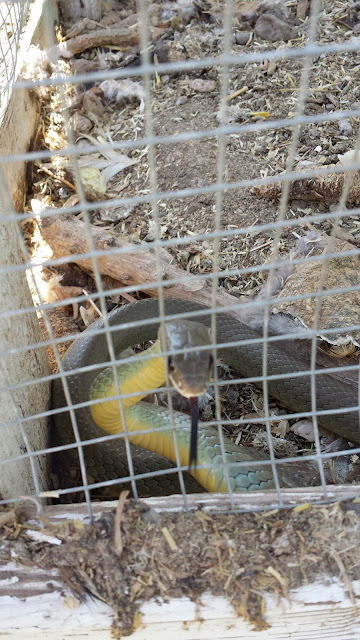 So now that summer break is underway the kids have really hit their stride.  They've been getting along together wonderfully and the boys are very good about keeping Ellie involved in their play. 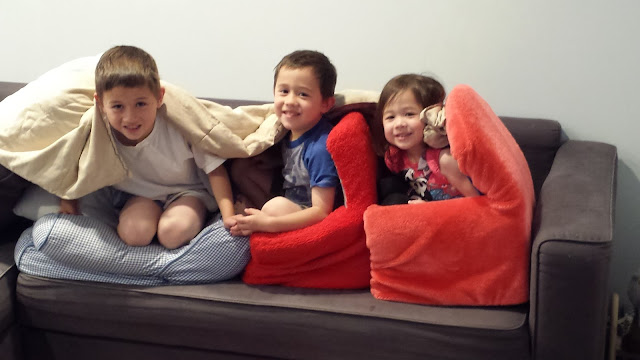 On that note, Ellie has also been very good about involving Daisy in her play. 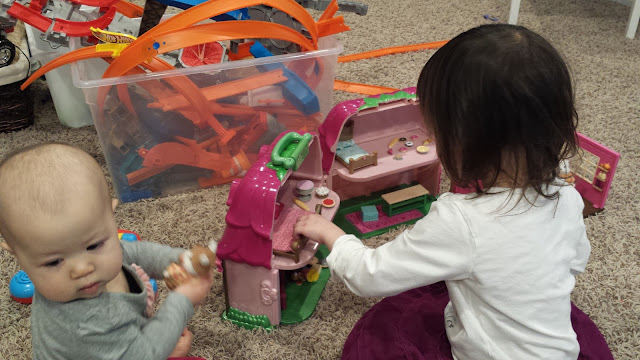 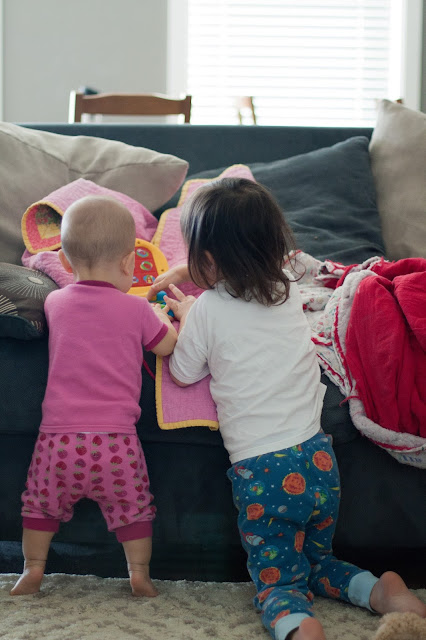 This picture should have gone in our last post but it was on my phone and I forgot to transfer it to the computer.  So here you go.  Hope it was worth the wait. 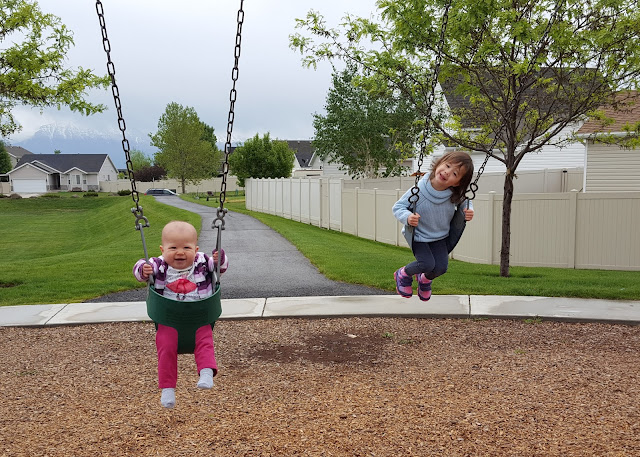 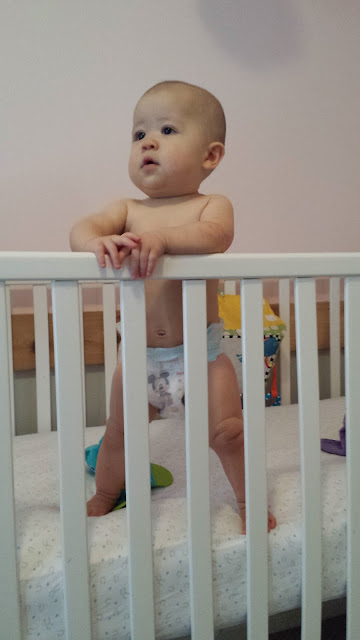