Our life the past two weeks has been consumed with flooring.  The new laminate had to sit in our house for at least three days, which turned into a week and three days when the installers couldn't come any sooner.  So we lived for a week with access to the front door and hallway blocked because of the boxes of laminate, and told visitors through the window to enter through the garage.  It was less than ideal but amusing all the same. Collin spent 3 days ripping up all the old flooring and baseboards, and after many hot showers and much Bengay, he's none the worse for the wear. 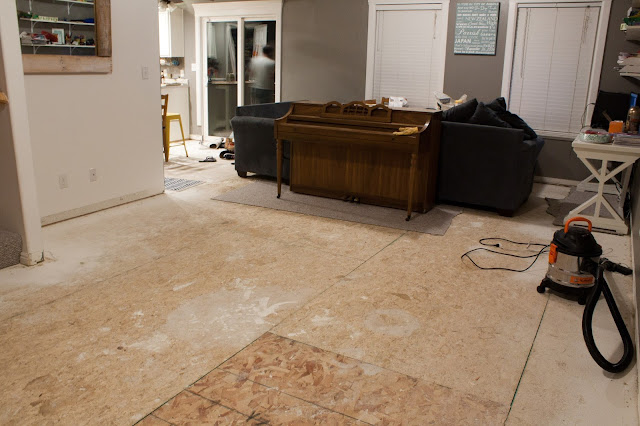 And now the fun part - new floors!!  We love them!  They're a bit darker than we expected and there have been a few slips and falls getting used to having all hard flooring, but I'm still happy with the switch.  Now to get all that trim back up... 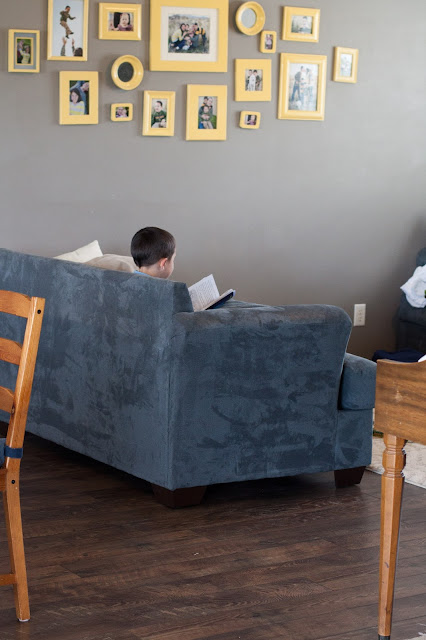 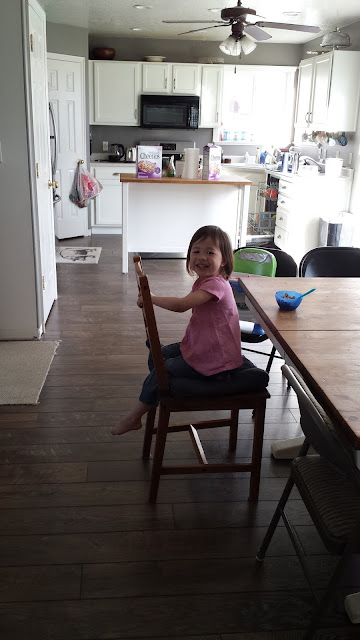 The boys were on spring break the first week of April.  Collin took that week off so we could either go on a spontaneous trip or get stuff done around the house.  The delayed flooring installation decided for us that we'd be staying put.  We did manage to take the kids on some fun outings, though.  Collin took Isaac to the nickel arcade where they played to their hearts' content, and I took Sammy to see "Zootopia" at the theater.  We played his first game of air hockey while we waited for the theater room to be cleaned and he loved it.  And then there was a chance for a random photo op, so there's that.  Ellie chose Farm Country as usual for her outing. 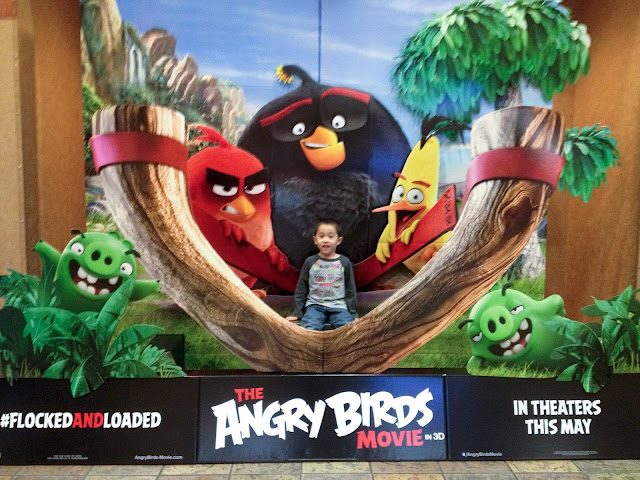 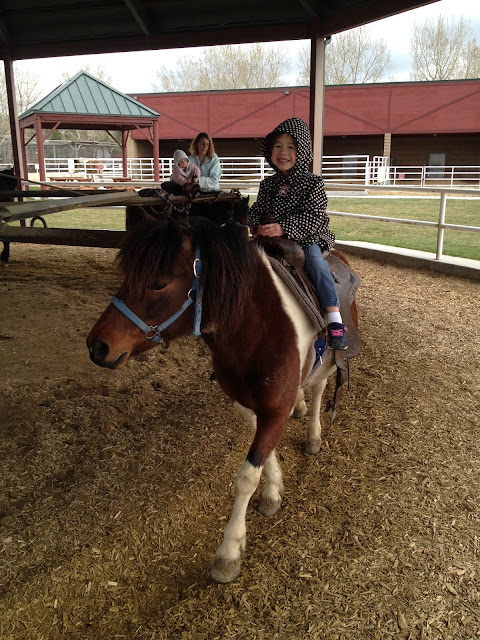 Spring has sprung!  I just love this tree on the side of our house.  When we first moved in I had plans to remove the tree because it was so close to the house and wasn't anything special besides being a good shade provider.  Every year I look forward to it blossoming.  And every year shortly after it blossoms there's a fiercely windy storm that blows most of the flowers off and then I am sad. 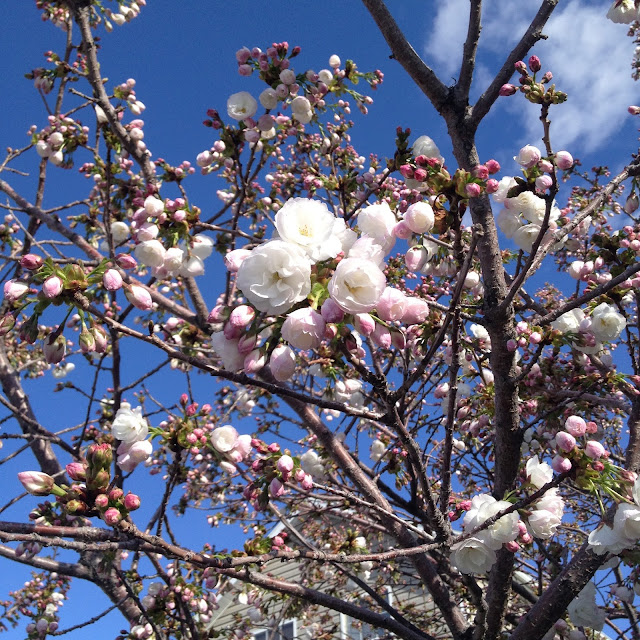 I saw rhubarb at Harmon's last week and had to buy some for pie. I had some strawberries at home already, so strawberry rhubarb pie was born! 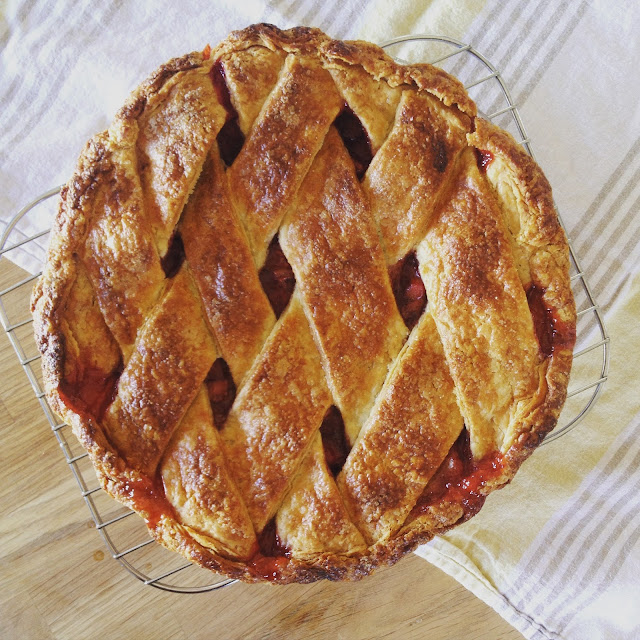 And the following week Smith's had a sale on berries, so strawberry-balsamic pie was born.  This one was extra juicy and made me very glad that I'd lined the pan with foil.  The pie turned out perfect, though! 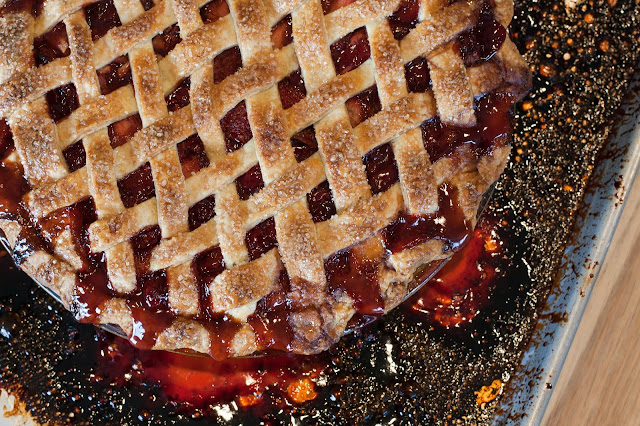 The kids have been working really hard to get along better lately.  And by "the kids" I mean "Sammy and Ellie," and by "get along" I mean "not kill each other."  They've been making some progress.  Here's proof: A month ago Sammy wouldn't have been able to coexist on the same couch as Ellie.  Thank goodness for Isaac! 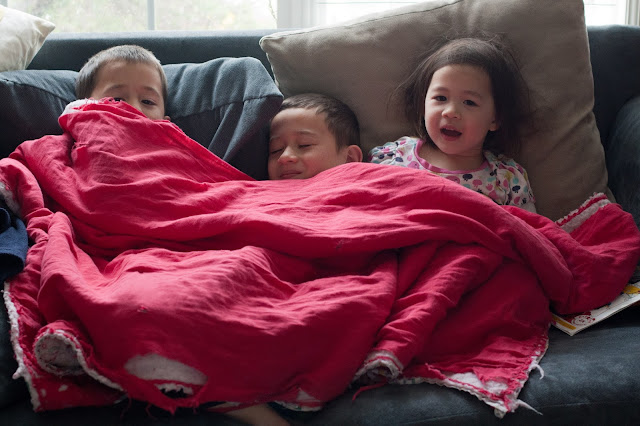 We had a few nice days this month between all the spring showers (more like tempests here!), and the kids took advantage.  Here they are lined up for a bike race: 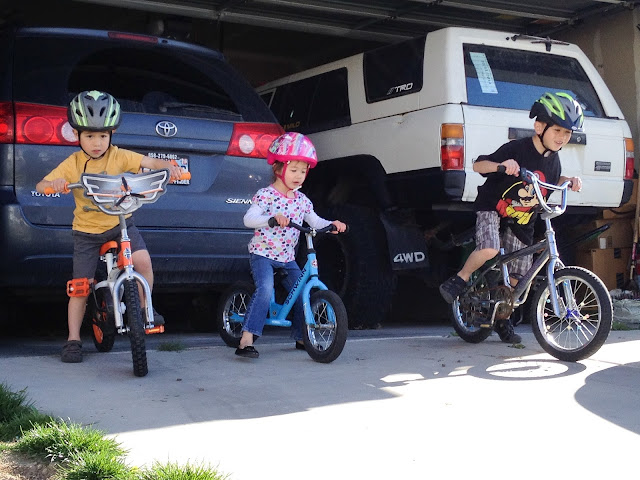 Daisy's a crawling champ now!  She's a little too good at it sometimes - look away for a second and she's halfway across the room!  She moves a bit like a bulldog, and it's pretty cute.  She's about the brightest baby I know, by which I mean she's so full of light and love and happiness.  If you call to her from across the room, she'll look at you and a huge smile will fill every inch of her face.  In fact, that smile extends to her whole body, which will start convulsing with joy.  I think it's the most validated I have ever felt in my life.  Because of that, here are a million pictures of her! 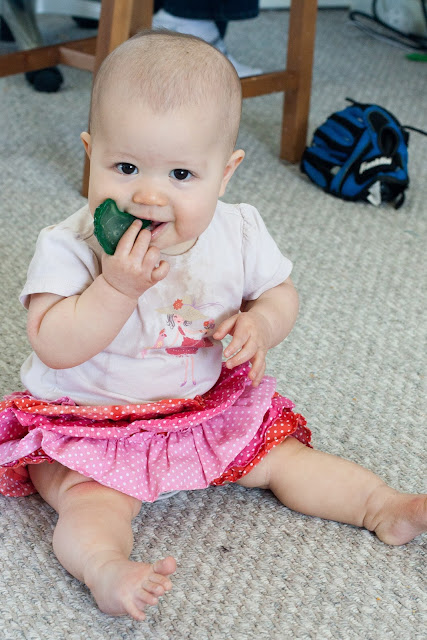 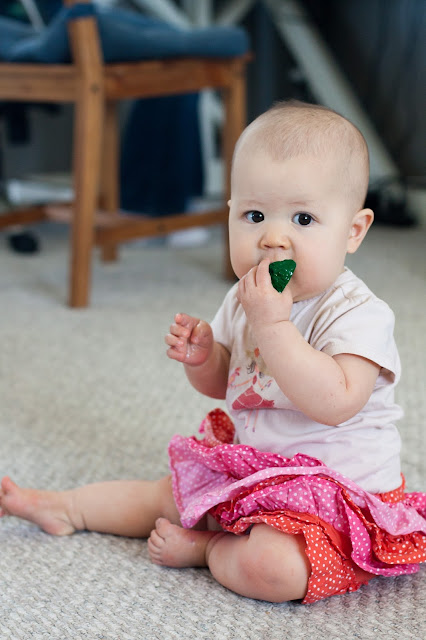 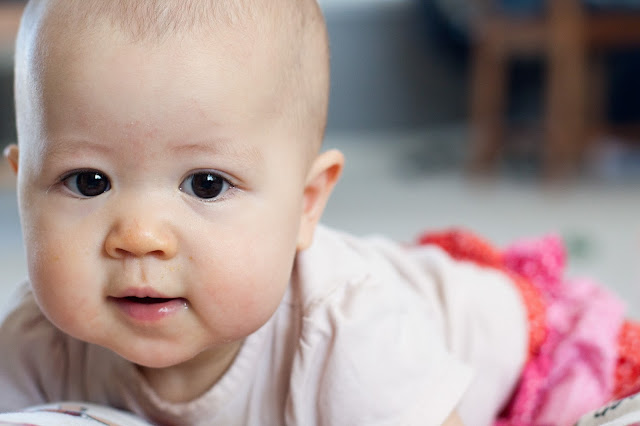 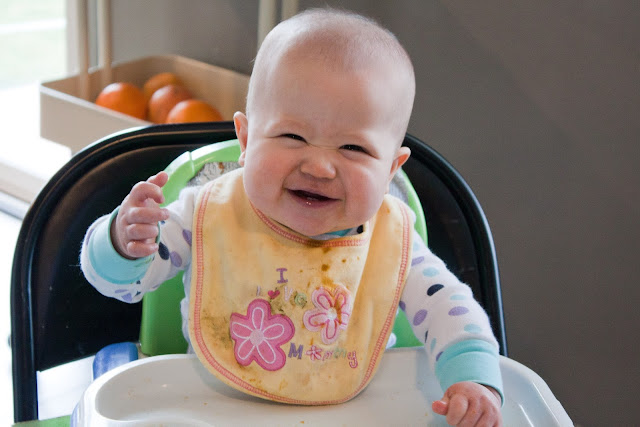 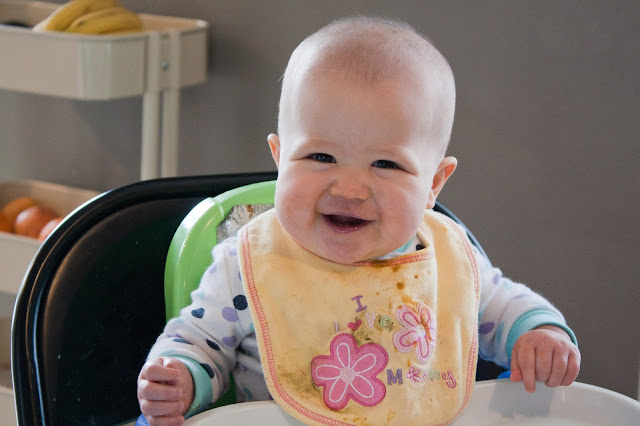 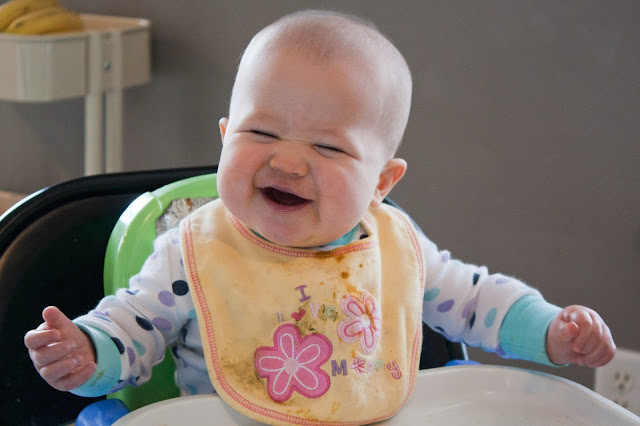 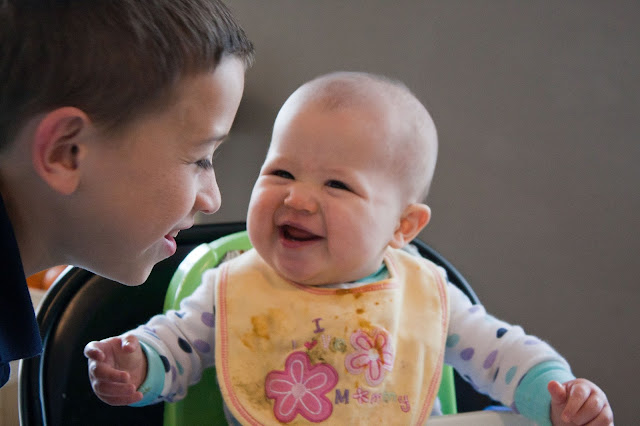 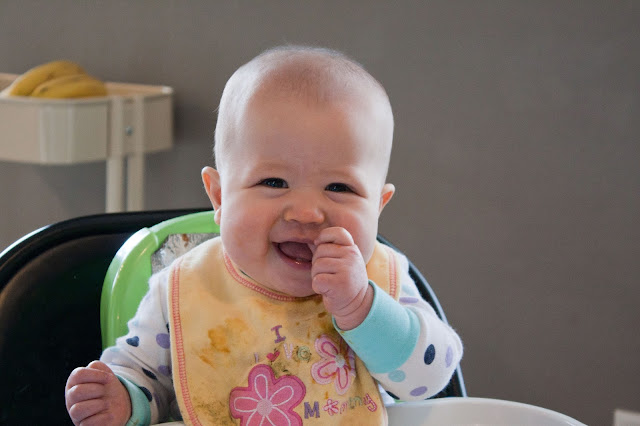 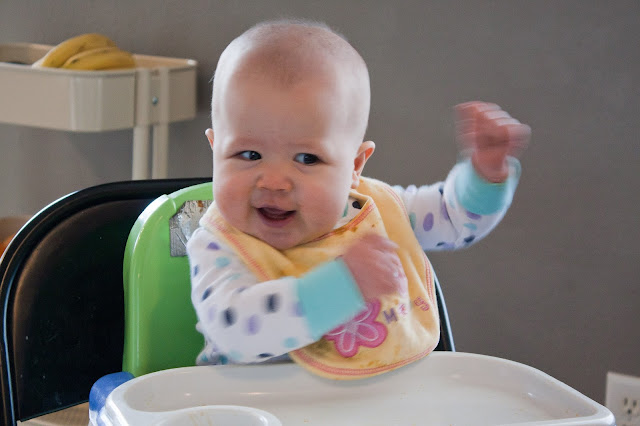 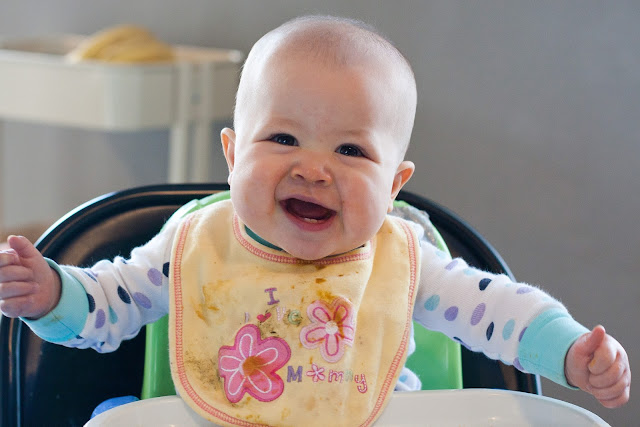 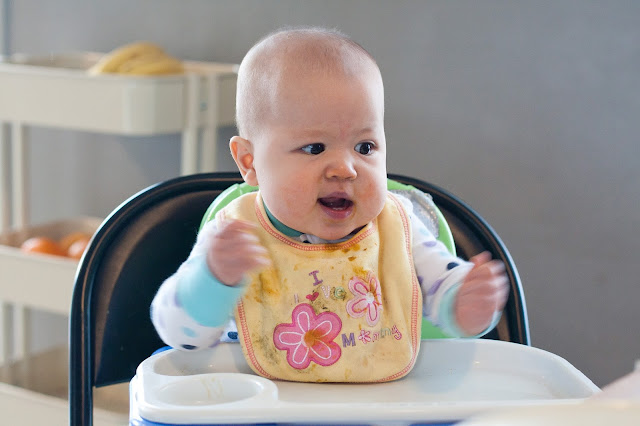 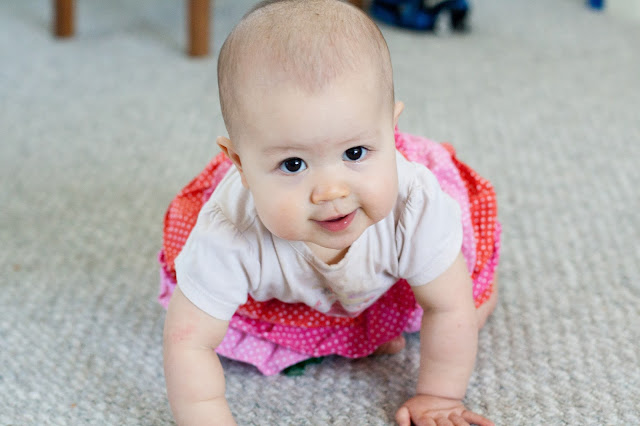 Posted by Maxine Parrish at 7:49 PM