We spent New Year's Eve watching the neighbors light up our cul de sac with aerial fireworks (literally - some of them went wayward and hit some other neighbors' yards!).  The kids went to bed later than usual but still before midnight, while Collin and I stayed up to eat cheese and watch a movie (sometimes I miss having regular cable for things like New Year's countdown shows).  The kids watched the Rose Parade streaming on YouTube the following morning - a tradition from my childhood that the kids surprisingly enjoyed.  Weird aside: this was Bob Eubanks' and Stephanie Edwards' last time announcing the parade, which sort of got me in the feels; they've been announcing this parade as far back as I can remember, so it was always nostalgic for me to hear their voices.  Funny the things you take with you from childhood. 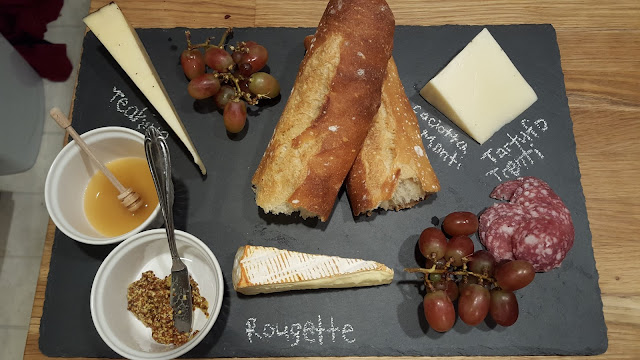 Tuesday Collin and I took Sammy and Isaac to see Star Wars: The Force Awakens.  Ellie doesn't do so well with long movies, so we each took one of the boys to a separate showing that day. While we both had several criticisms about various plot points, we still loved the movie (and the boys did, too).  I maybe got a little emotional when the big STAR WARS appeared on the screen with the John Williams theme blaring along.  The nostalgia is strong with this one! (We also dressed Daisy up for the occasion.) 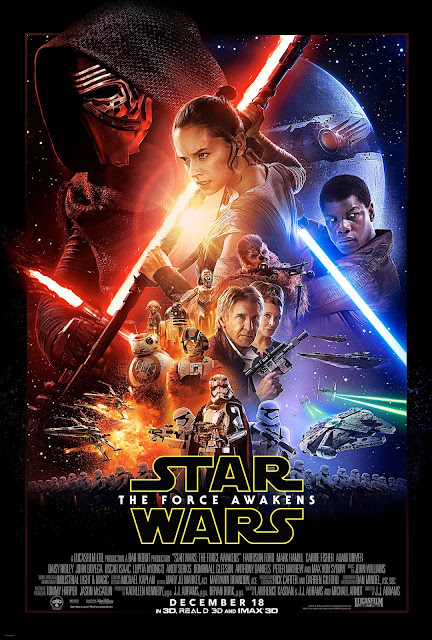 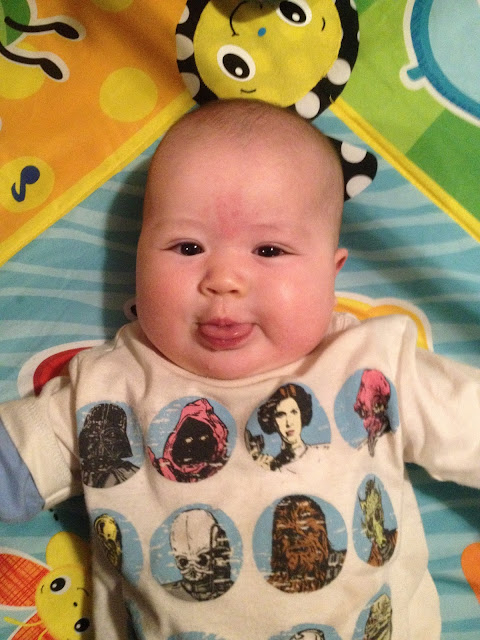 Our nephew Cade was baptized yesterday.  The kids always have a good time with their cousins, and it was great to go support him on his big day. 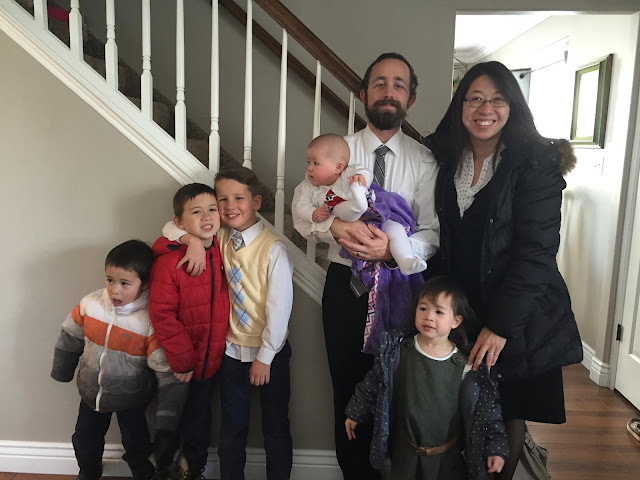 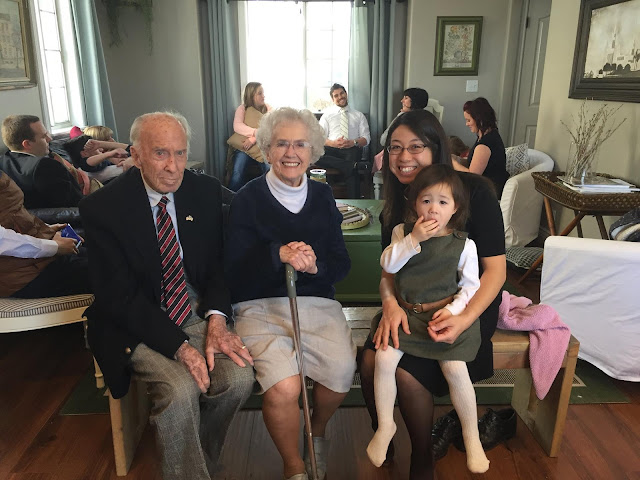 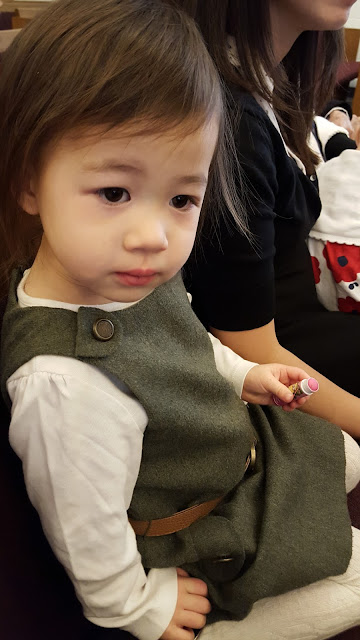 My friend Wendy was in town for a few days this week and we met up in downtown SLC at The Rose Establishment (my new favorite cafe for their London Fogs and Chocolate Chip Cookies of Awesomeness, hipsters notwithstanding) for a couple hours.  I've known Wendy for something like 13 years from my time in the singles' ward in L.A.  She is genuinely one of the most interesting people I know and I'm so glad I got to reconnect with her for a bit. 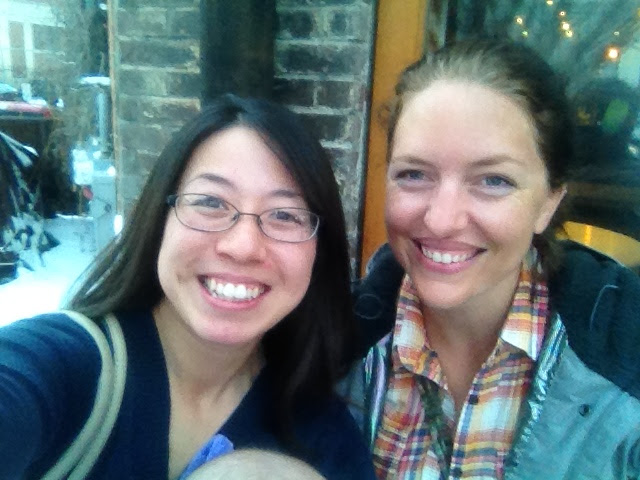 We spent our final week of vacation just enjoying our playtime.  We played with Christmas presents, ran errands, and cleaned the house.  Nothing grand, which made for a rather relaxing-if-uneventful week.  We're not the kind of people who get big projects done when we have a bit of spare time.  Sometimes I wish we were more project-ambitious, but then I just bake something and eat it in front of the TV and forget what it was I'd wanted to get done in the first place.

Speaking of baking stuff, I made this apple rose pie out of the pie cookbook Collin got me for Christmas.  It's an apple pie... with rose water!  And it was delicious!  Delicately floral tasting and different enough to feel special, which is why we had it for dessert on New Year's Day (with the southern traditional meal of black-eyed peas and collard greens for dinner, because I fancy myself Southern sometimes). 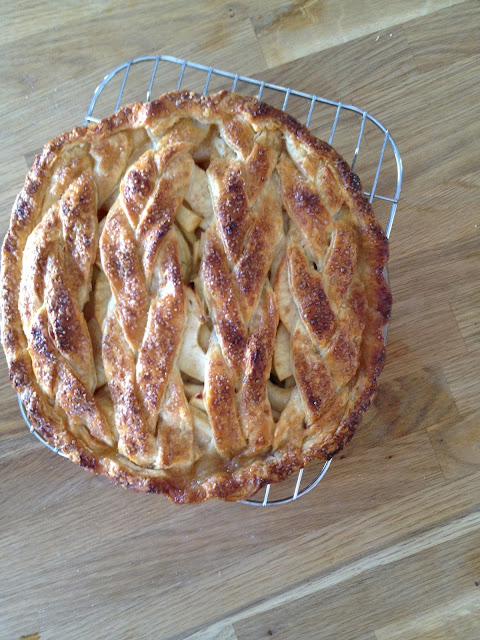 I haven't done any kid updates recently, so here goes:
Daisy is sleeping even worse than usual lately, if that's even possible.  Her longest stretch is maybe two hours.  It's awful.  And yet, when she's awake she is the most content and happy baby I think we've ever had.  She still doesn't laugh much, but she smiles constantly.  Except at strangers.  She studies strangers for a few minutes, sometimes even while smiling, before she'll suddenly burst into tears. People almost universally mistake her for a boy. 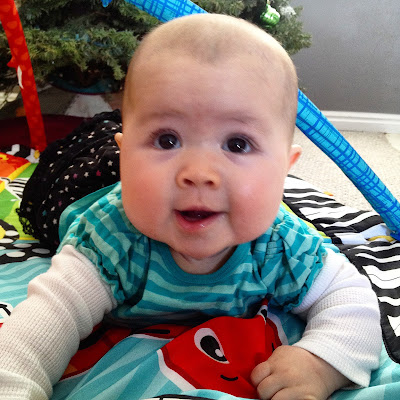 We affectionately call her Grenda (er, the one on the left). 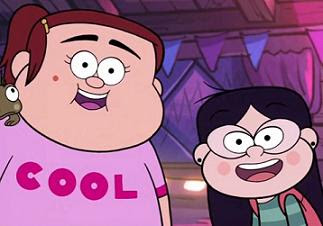 She is rolling over a bit more now, but only back to stomach.  She's far more interested in sitting up and spends most of her back time (or "backie time," as the kids call it) doing crunches in an effort to get herself upright.  She'll be starting solids in a few weeks, which completely blows my mind.  She grabs her feet, drools, babbles, and blows raspberries all day long.  Her favorite is jumping, and she spends a ridiculous amount of time in her little jumper contraption, happily jumping away.  Also, those chubby legs!!! 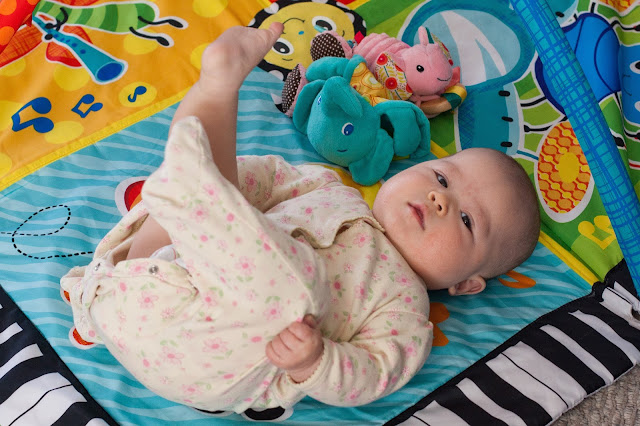 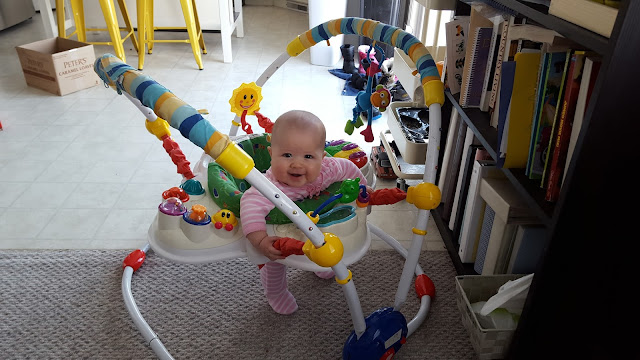 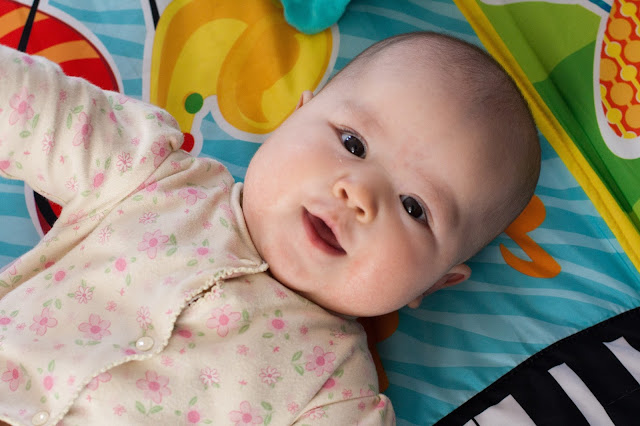 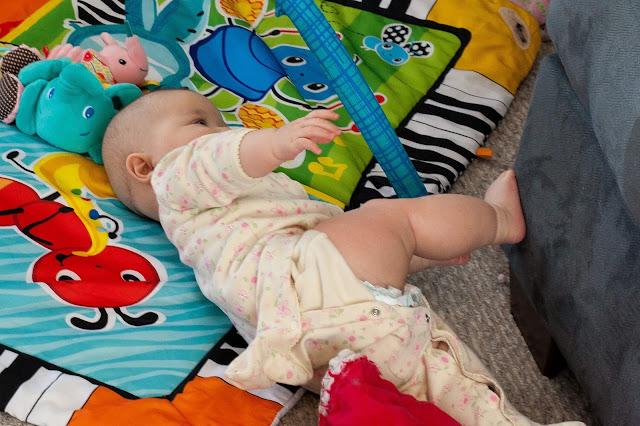 Ellie constantly reaffirms in our minds that the phrase "terrible twos" should really be renamed "terrible threes."  She's a bit of a terror lately, with daily tantrums, usually at dinnertime, and willful disobedience.  If she doesn't want to do it she simple won't, and it's usually accompanied by some totally random, wildly gesticulated, matter-of-factly stated reason: "Well, I can't eat dinner because... there aren't any puppies here."  Her dainty little body is capable of producing noises an elephant would be proud of. Jumping and stomping are her favorites. So is Curious George (the cartoon as well as the book). She has the funniest inflections in tone when she talks, like she's an adult but sort of a precious one.  She'll tilt her head to one side, look at you with wide, sympathetic eyes and, in a dramatically empathetic tone of voice, say something like, "We need to change baby Daisy's diaper, huh?"  She's playing with dolls more lately. Sometimes Sammy and Isaac will join her, and I've even caught Sammy playing with that dollhouse on his own a couple times.  Granted, he was using his AT-AT figurine as the doll, but still.  :)  Here's Ellie from this afternoon using a chapstick and a plastic cupcake as "dolls" on the piano. Below that is Ellie's newest obsession: Smearing about half a tube of chapstick on herself at a time. 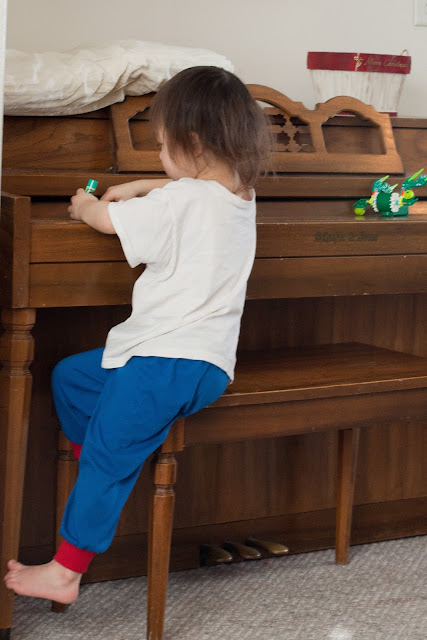 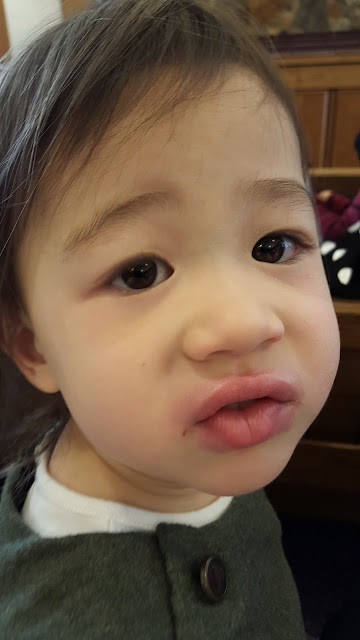 Sammy has been going through a rough patch with Ellie lately.  The two are so similar in personality that they tend to fight like cats and dogs.  For part of Christmas break the two got along so well that it felt a little miraculous.  Mostly, Sammy just sticks with Isaac.  He's still super into Legos (ever since his cousin Simon gave him a Ninjago book for Christmas he's been obsessed with that Lego series), but also love k'nex and Star Wars (especially all things Hoth).  He is sort of the comedian and primary catchphrase coiner in the family. "Backie time" (referring to Daisy being placed on her back on the playmat), "a-nane-dun-dun", and "Adventure Time: modge on your face!" (a game he invented where he sings this song while drawing his face close to Daisy's, which produces a wild head shake and smile from her) are his latest.  The whole family has adopted these sayings in our daily lexicon.  Sammy is our picky eater, though given enough motivation/cajoling/threats, he'll manage to choke down beans and pretty much all cooked vegetables.  Sammy absolutely adores Daisy.  The love in his eyes when he gazes at her is readily apparent, and he is the best sibling at keeping her happy and entertained without freaking her out (that role falls to Elinor).  He's still our most affectionate child and still has a thing for necks ("Because I like soft things.").  The other day Collin was watching fun videos on YouTube with the kids when Sammy saw one with a thumbnail image of a couple of chesty women in tank tops.  He immediately said, "Ooh, click on that one!  I wanna see that!"  So, uh, Sammy likes soft things and will very likely be a breast man when he grows up.  0_o  (And no, Collin did not click on it.)

Isaac has had a big leap in maturity recently.  He unfortunately gets mentioned least here because he's generally the least squeaky wheel.  Er, sorry, Buddy.  But we are so thankful for him.  He does his chores with minimal complaining, takes care of all his younger siblings, and does whatever he can to include Ellie in his and Sammy's play.  I love that he's old enough to start playing more of the grown-up board games with us.  He's recently learned how to play Munchkin, Ticket to Ride, and Catan Jr.  So much fun!  We bought Isaac a slightly more advanced book for Christmas, thinking he would be able to tackle it in a few months with some help from us, but he's almost  done with it already!  Isaac lives for playing video games (Lego Marvel is the current favorite), but he still spends plenty of time reading, usually while on the can.  In fact, when Isaac says he has to poo and he grabs a book, we know it'll be about an hour before we see him again, no exaggeration.  I used to be the same way as a kid, so I guess I can't judge.  :)
Posted by Maxine Parrish at 11:19 PM