Does that word bug anyone else?  Maybe it's its similarity to "vacay" that makes my brain cringe a little every time I hear or use it.  At least I'm not saying "staycay". (Gah!  Stop already!)

We decided to take a little staycation the weekend before my birthday.  Collin took Friday off work and we headed up to the city to do things we don't normally get to do.  First up was the Living Planet Aquarium in Sandy.  For a relatively small aquarium, I actually enjoyed it much more than other major aquariums (I'm talking to you, Sea World and Aquarium of the Pacific!).  The boys had even more fun that we had anticipated, and this ended up being the clear highlight of our little trip.  It was all downhill from there... 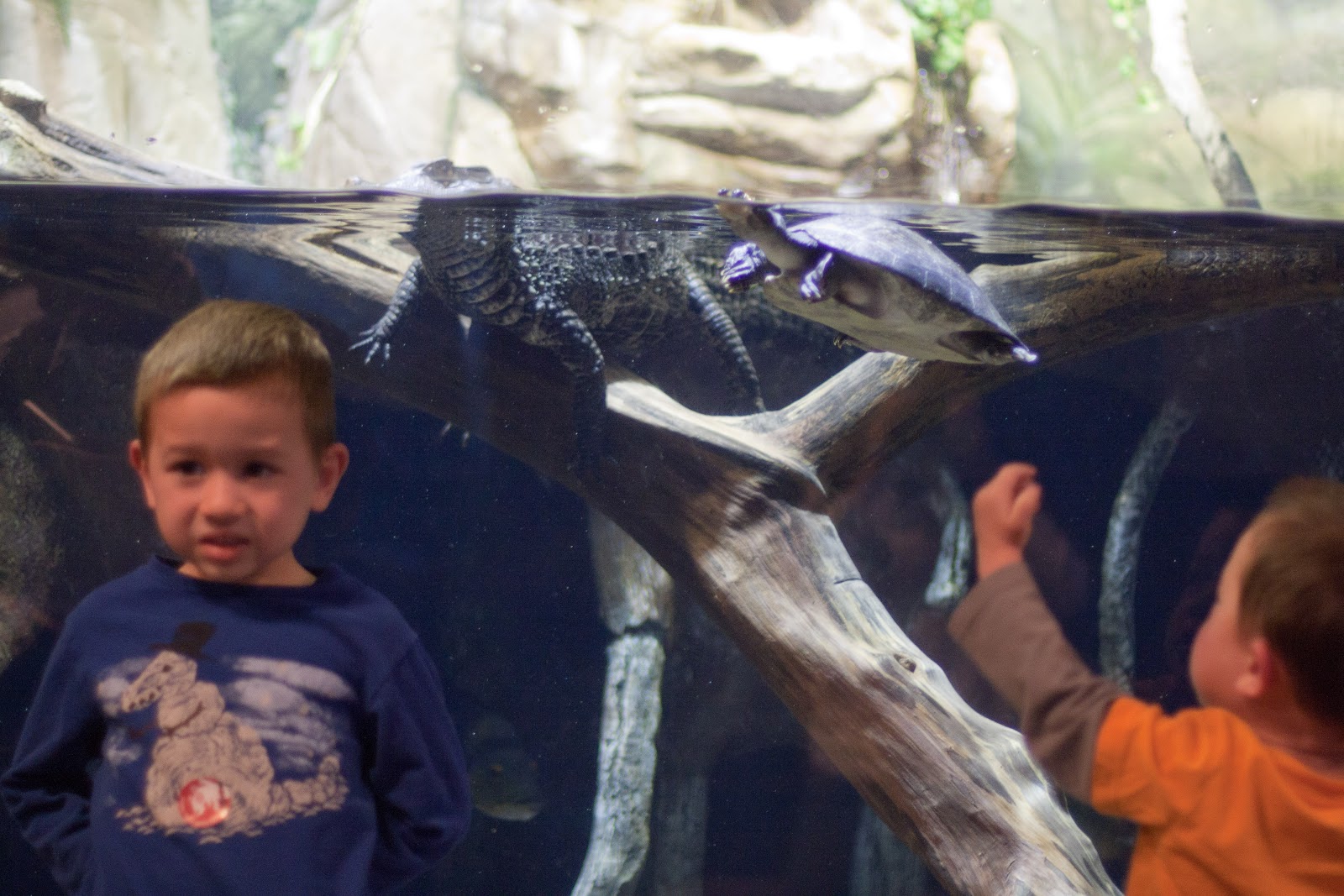 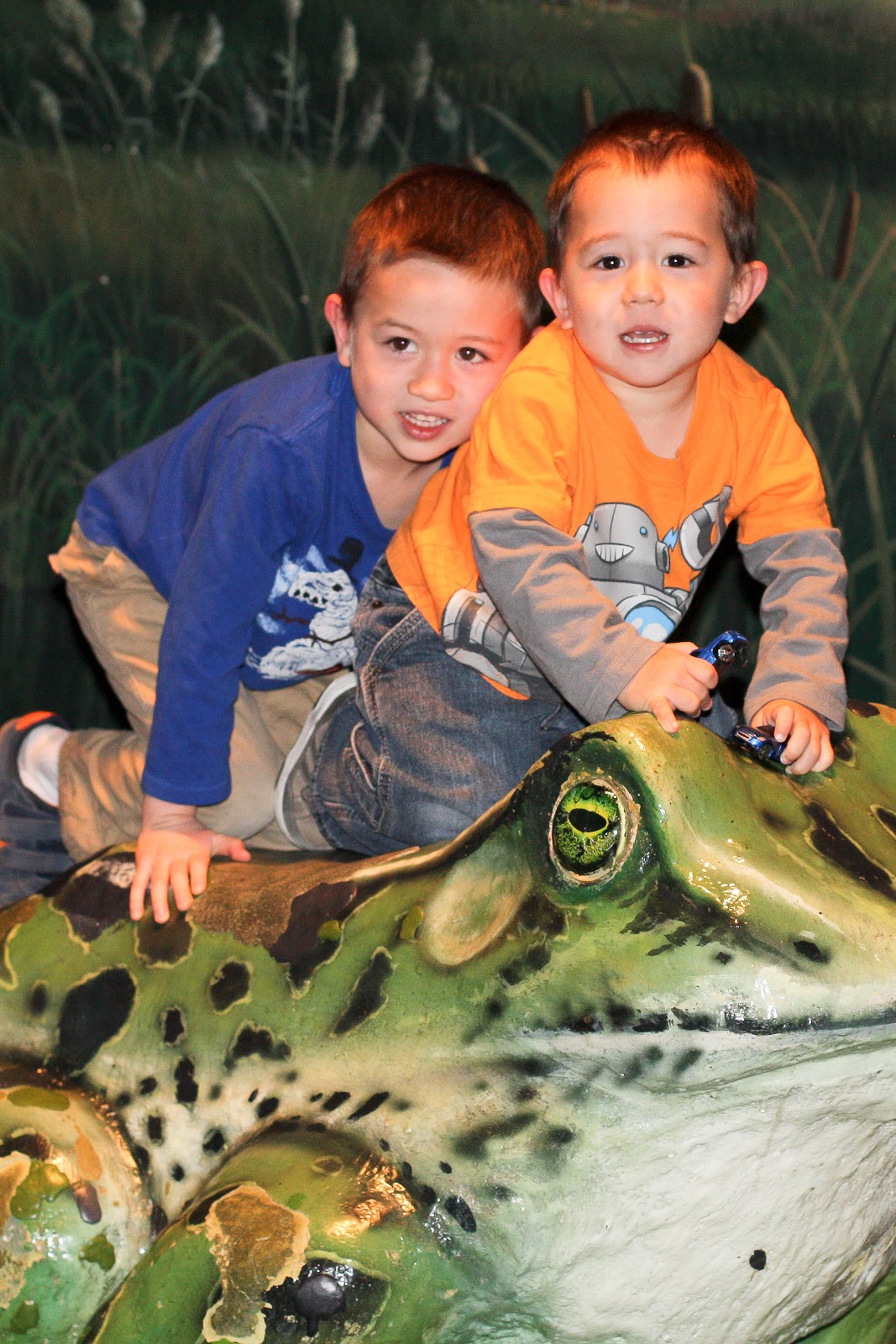 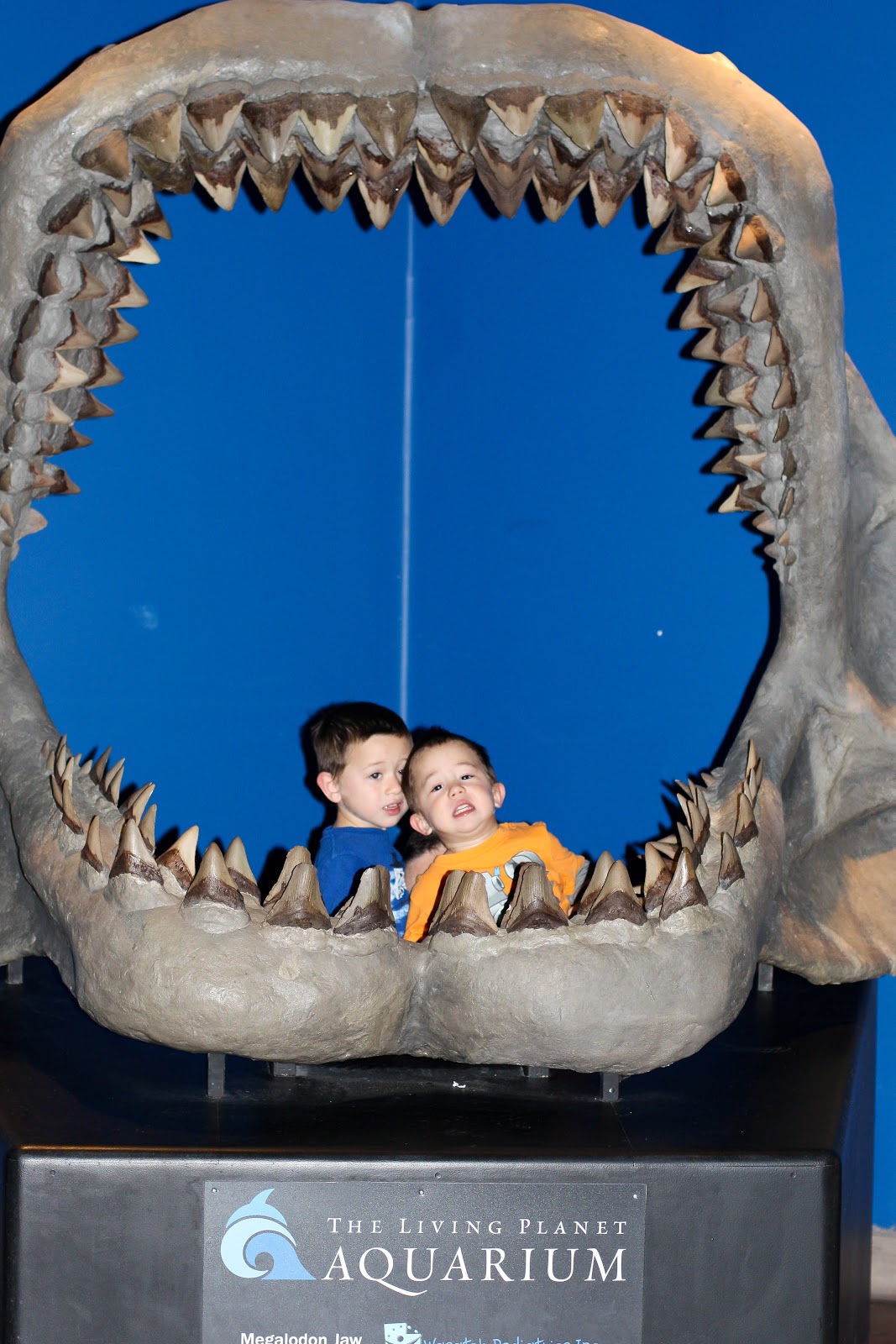 Okay, that's not true, but it kind of was.  I mean, everything else was fun but this was the MOST fun.  I'm not going anywhere good with this. Here are some jellyfish and an octopus. 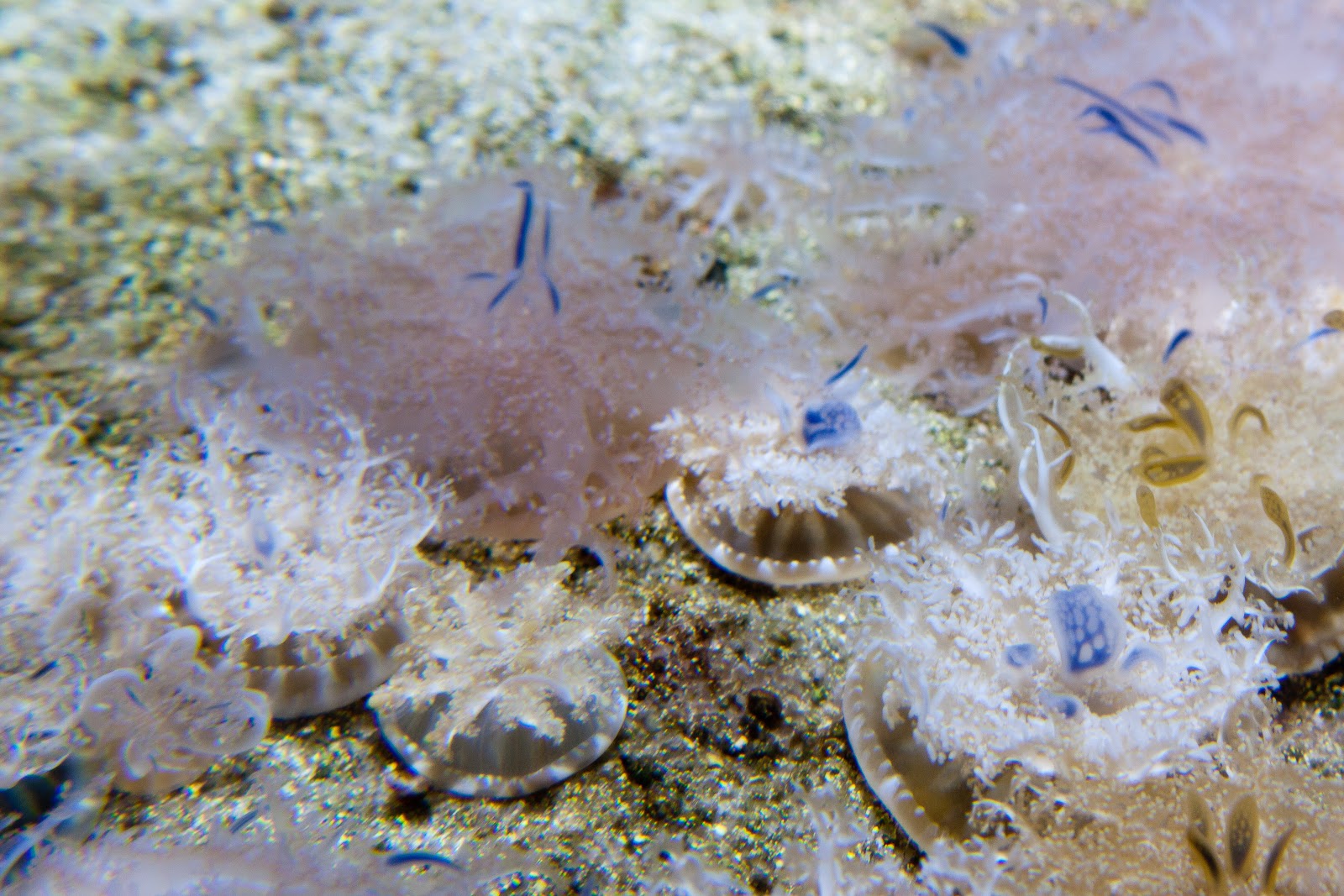 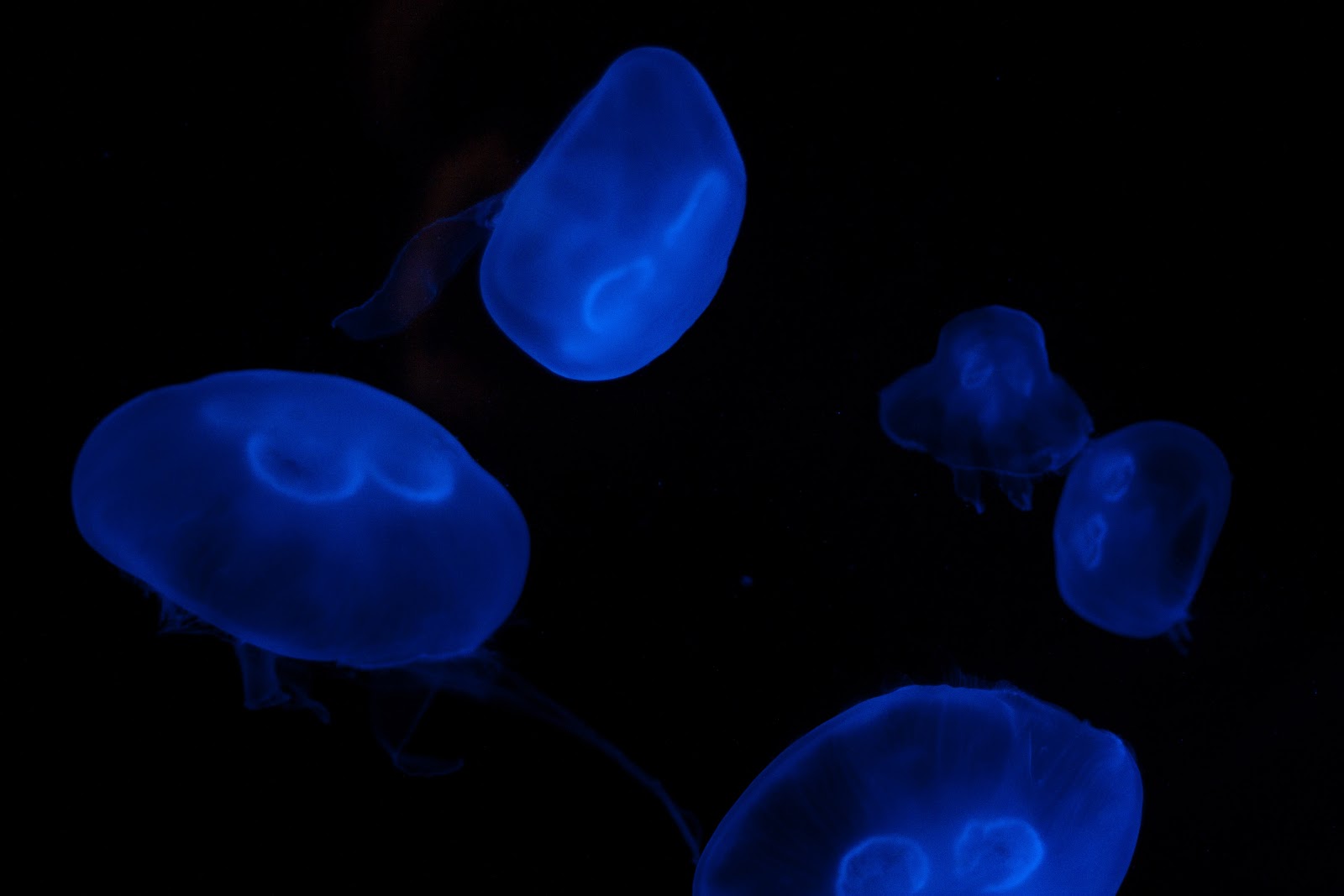 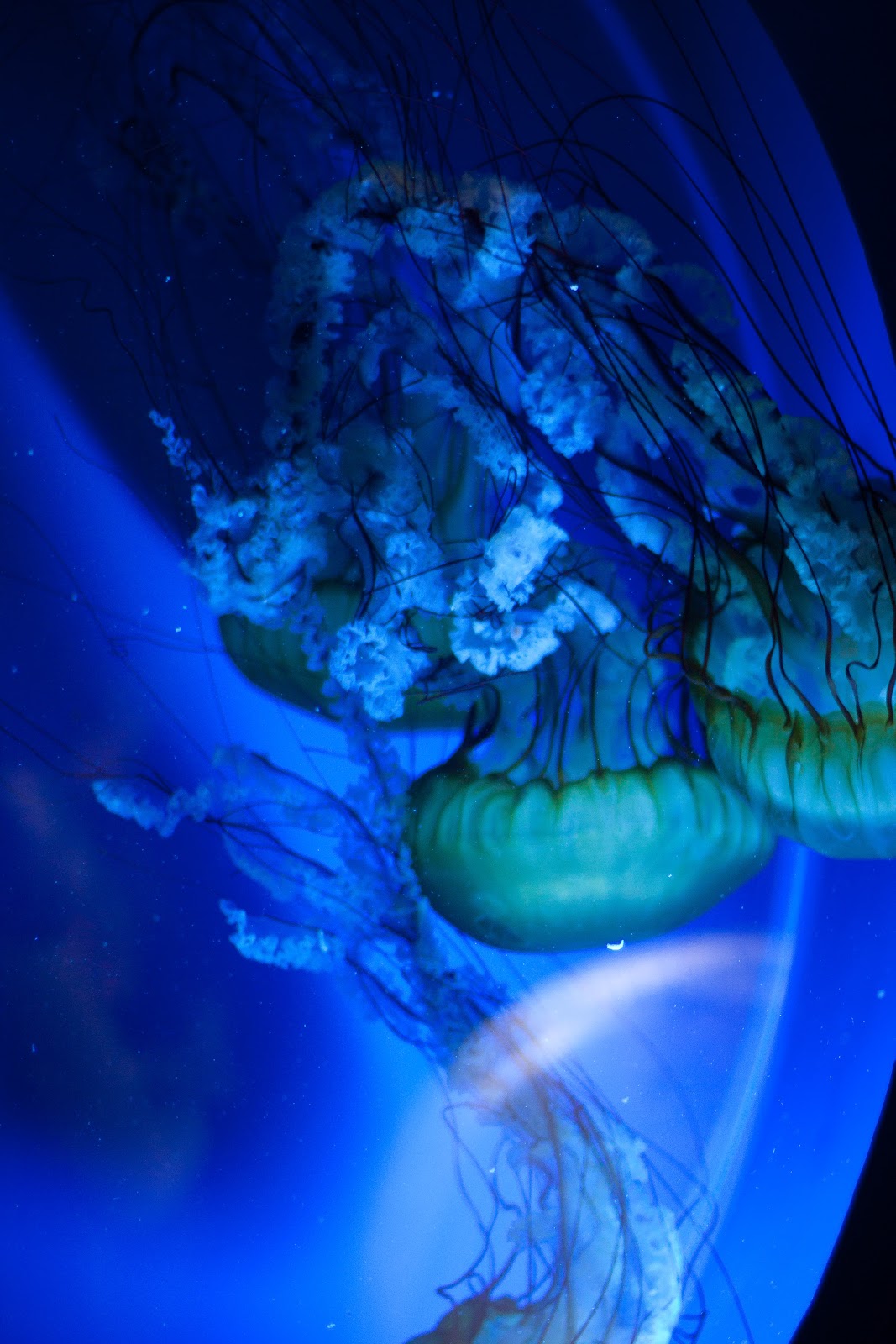 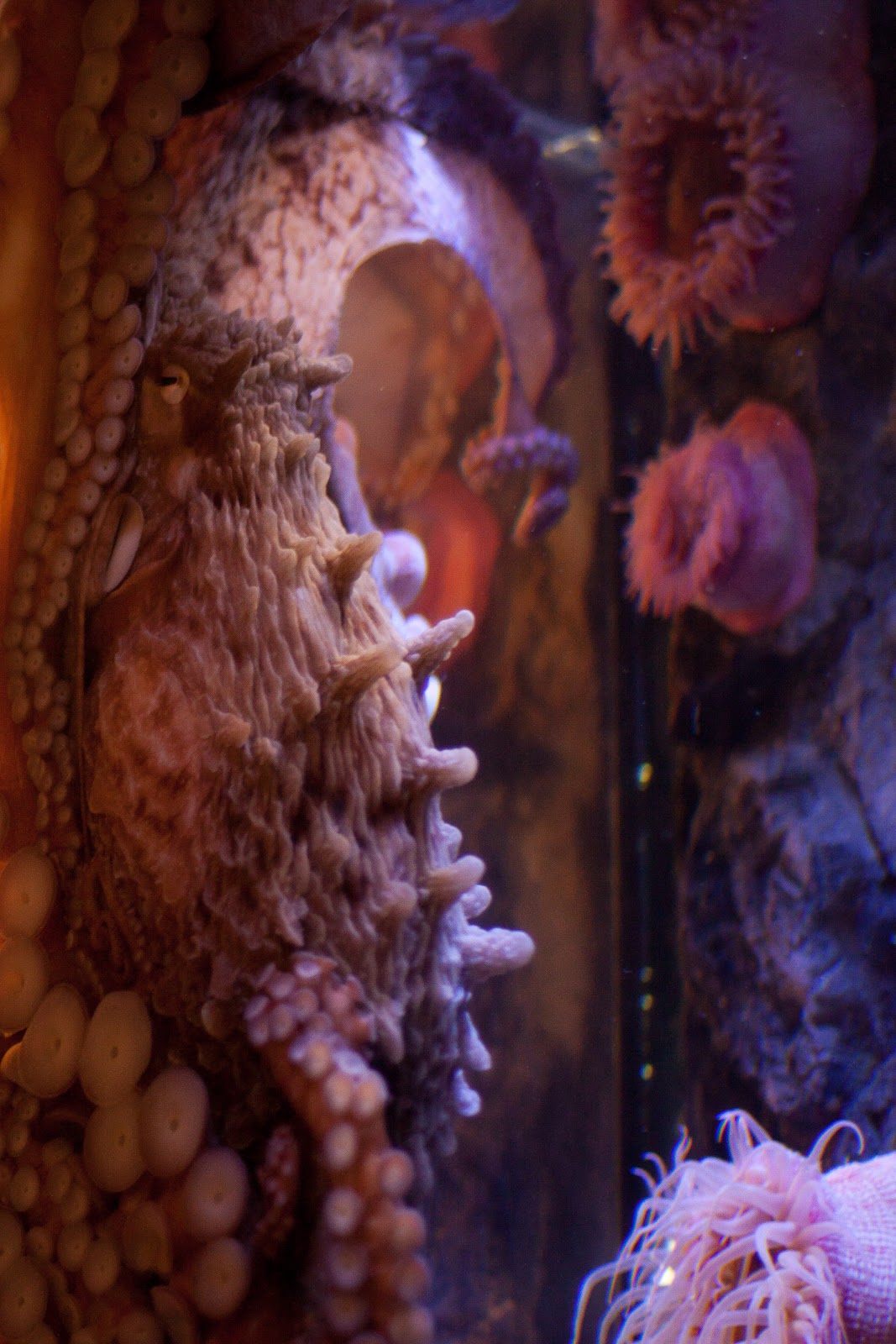 Lunch at Sweet Tomatoes (I'm not thrilled that it's starting to become our family restaurant, but why fight a good-ish thing?), then on to the hotel via Trader Joe's for some treats.  I'm not sure what it is about staying in hotels, but I never really outgrew my childhood love of it.  The fresh linens, the baby toiletries, and channel surfing on cable TV - it's all just so much more fun than the same or better stuff you've got at home.  The boys agreed, wasting no time in exploring their bed! 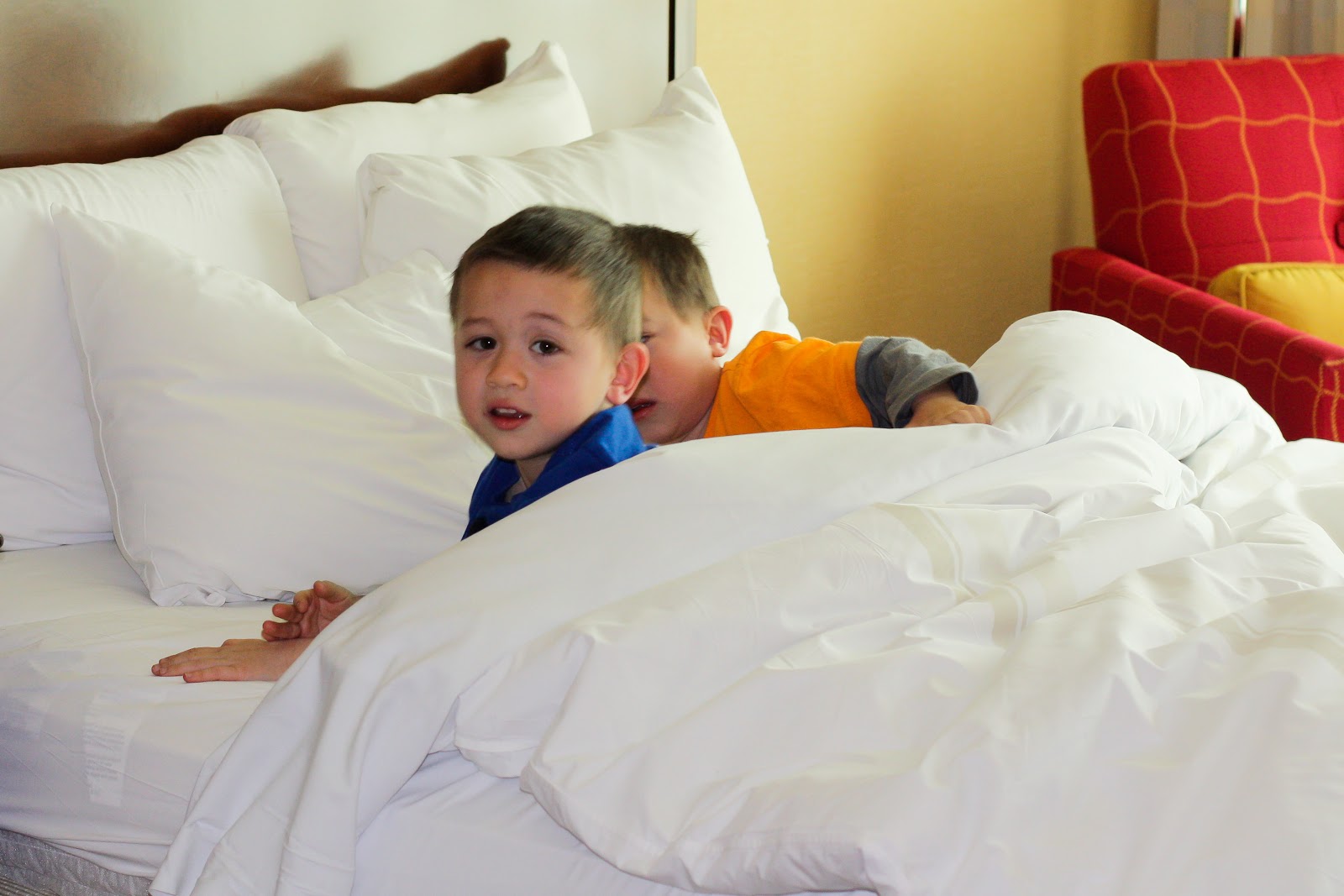 As soon as we had sufficiently jumped on our beds and ascertained the lack of anything good on TV, we all got in our bathing suits and hit the pool.  I kind of want to keep Elinor in her bathing suit all the time now - the cuteness is strong with this one! 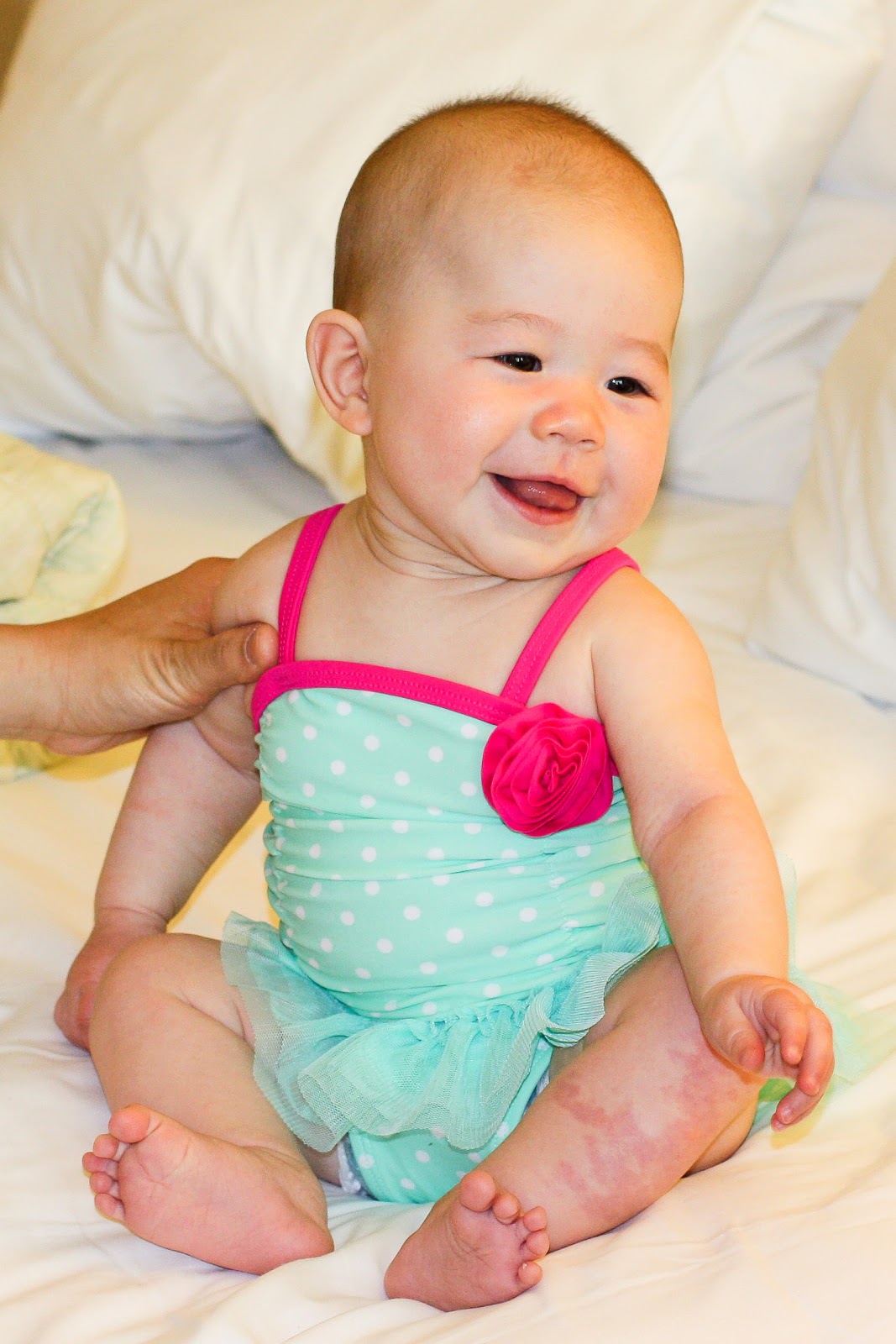 We chose a hotel within walking distance to the City Creek mall so that we could have a nice little evening stroll around the fountains and shops.  Sammy requested to visit the temple first (really? We didn't even tell him there was a temple there, nor did he see it there before he made his request!), so we did.  The kids, especially Elinor, were quite tuckered out by the end of the night. 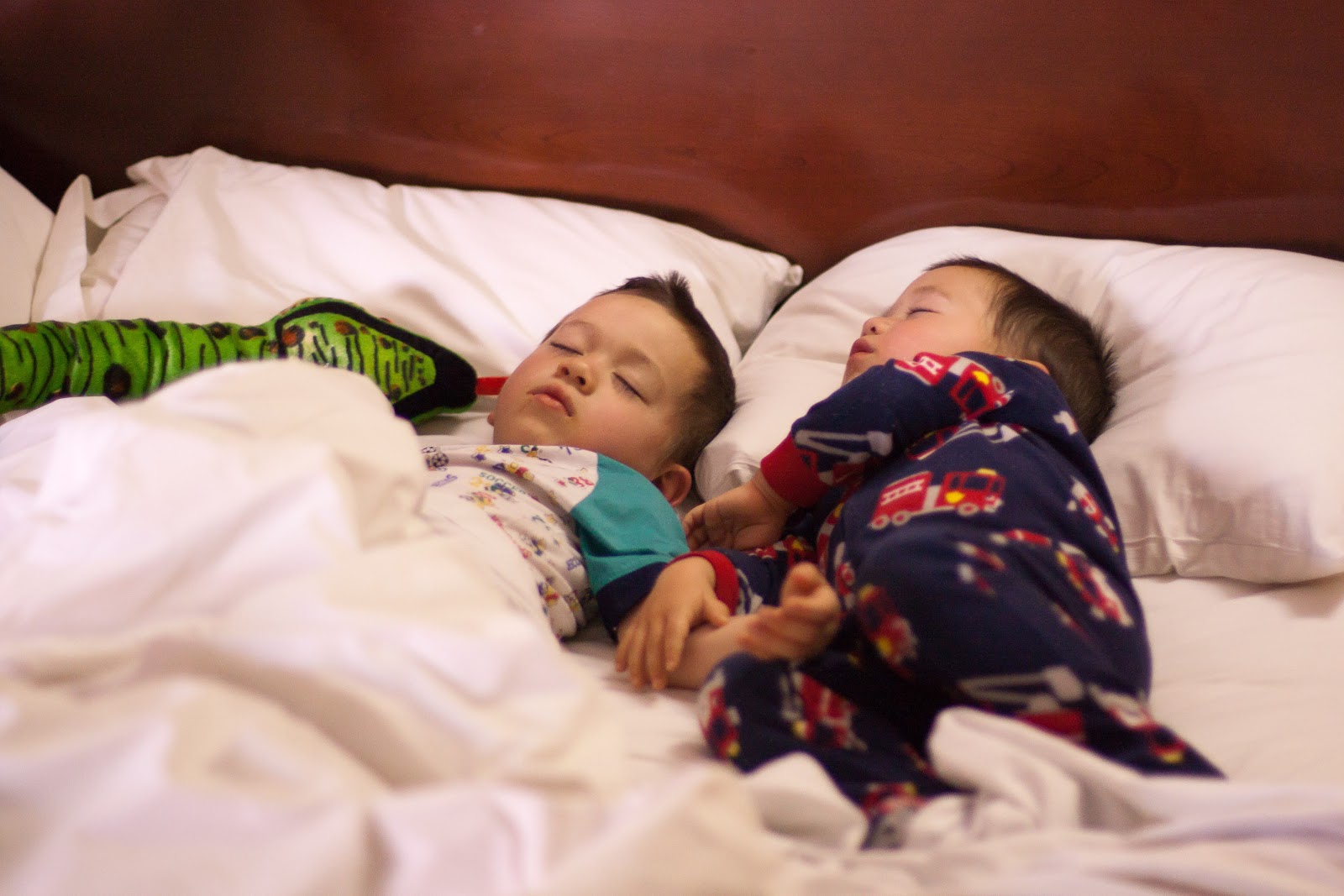 Saturday morning we headed over to the Gateway mall to visit the Clark Planetarium and the Children's Discovery Museum.  Unfortunately, we hadn't known about the St. Patrick's Day Parade that would be taking place just as we arrived, delaying the opening of the museum.  And it was a big one, folks.  So many people, and I'm pretty sure that parade lasted just shy of forever.  The boys wanted nothing to do with it because of the noise, so we ducked into the planetarium and then had an early lunch before the museum opened. 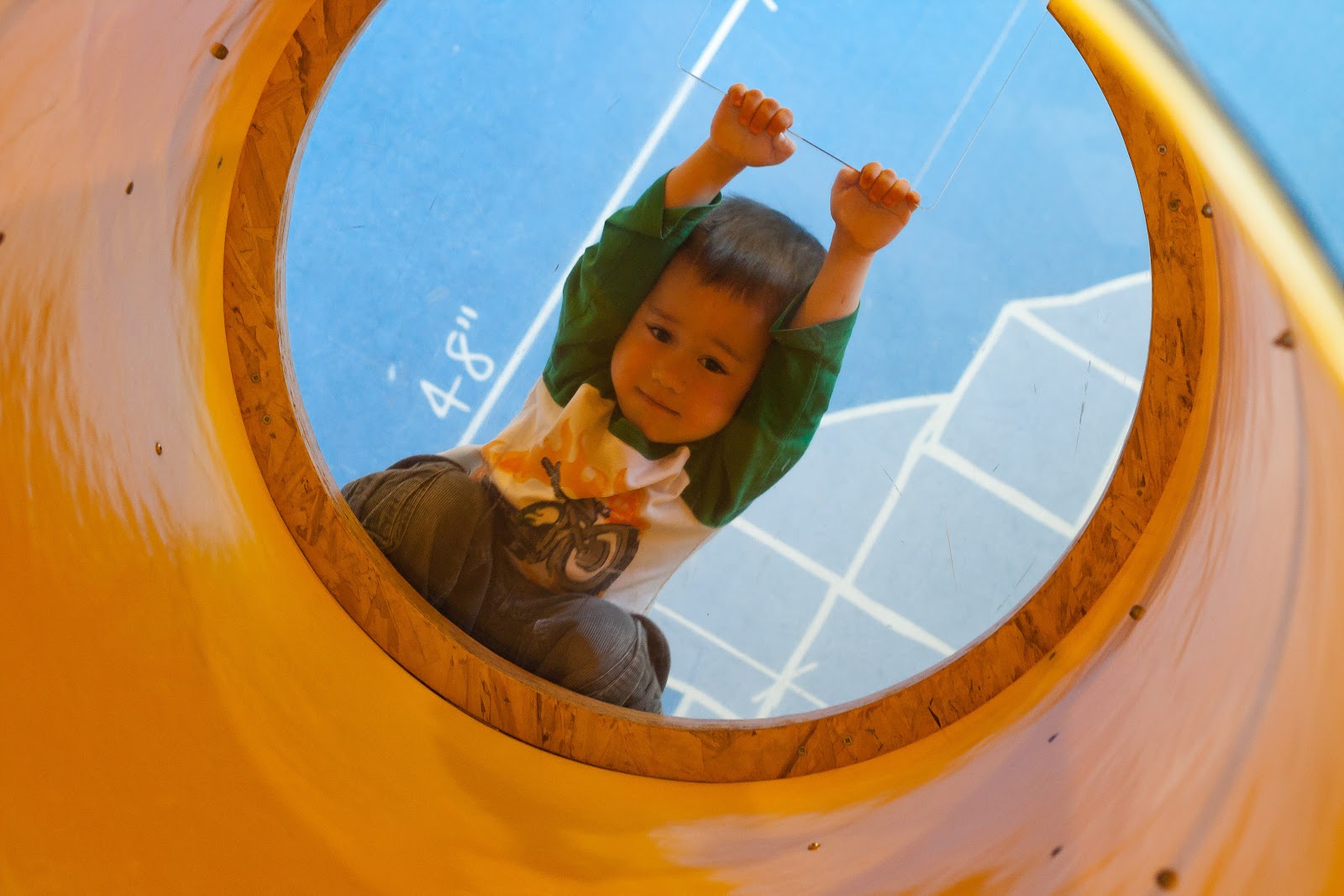 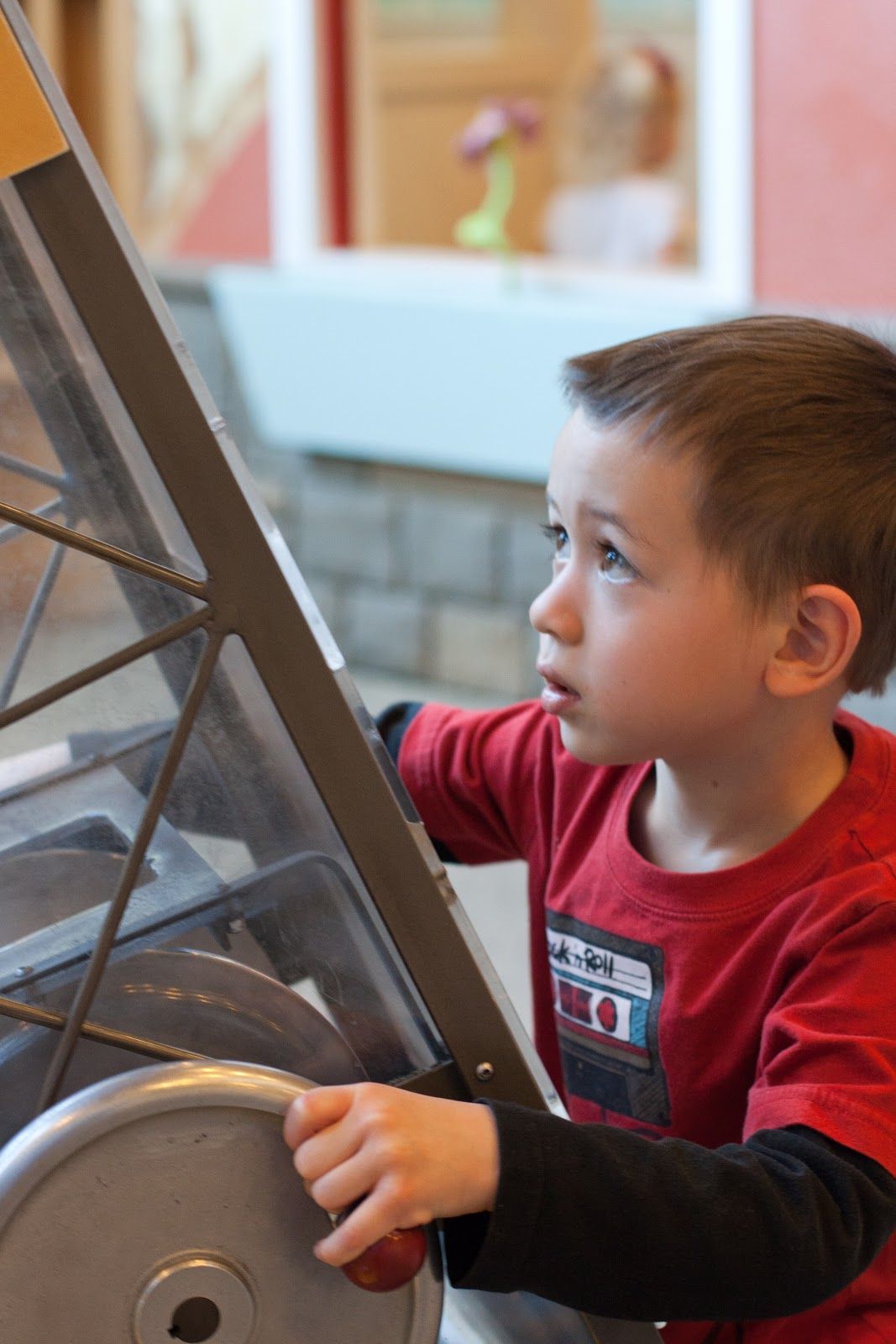 The boys loved the museum, but we didn't get to spend much time there before we had to hit the road.  After all, the Heber Creeper waits for no one! 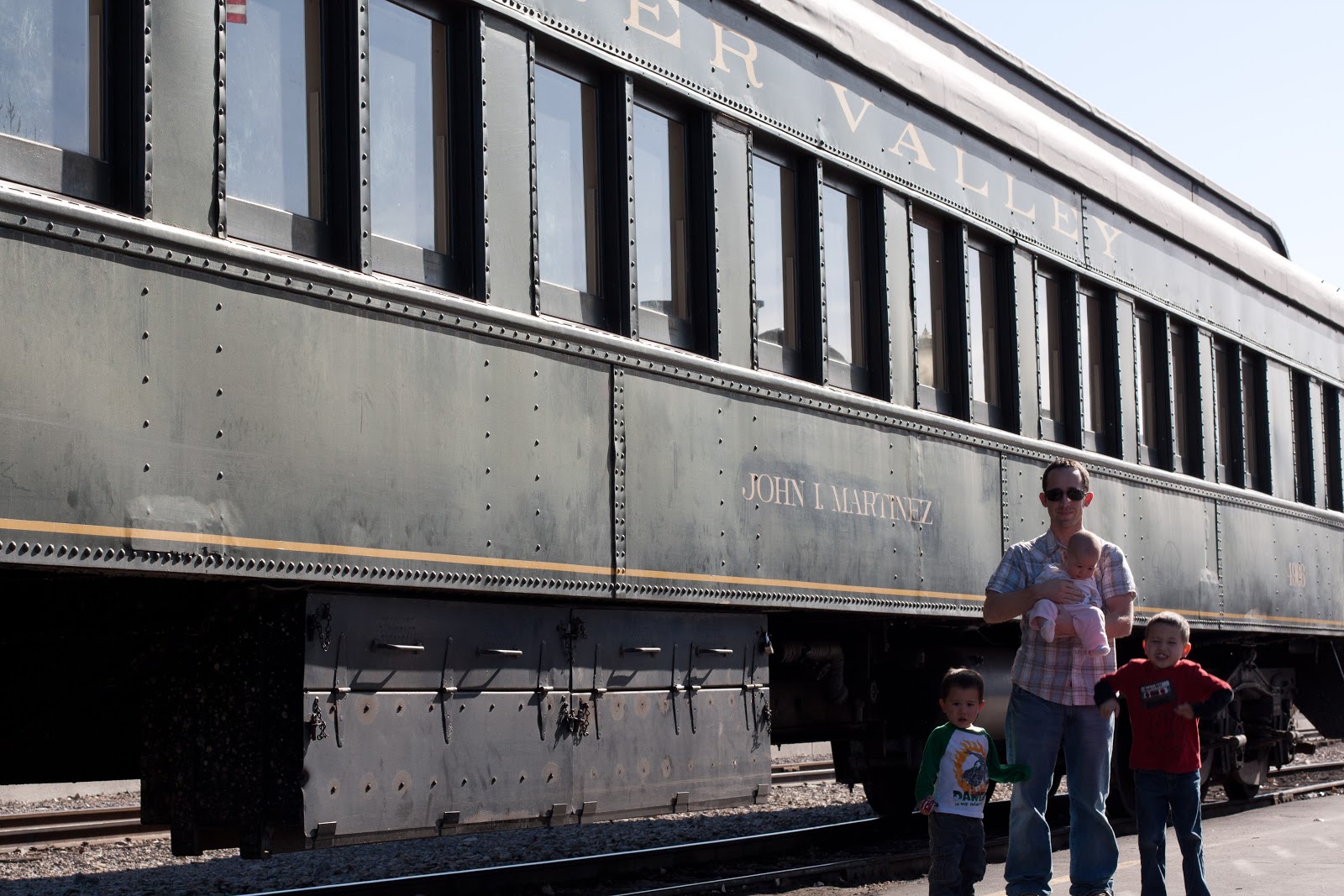 The boys had been waiting for this moment for a month - a ride on a real old-fashioned steam engine train!  Unfortunately, they fell asleep on the way there and were grumpy when we woke them up.  To make matters worse, their dislike (did I say "dislike"?  I meant "abhorrence.") of loud noises reared its ugly head each time the engine's whistle blew.  There was crying and whining and perhaps a little gnashing of teeth. 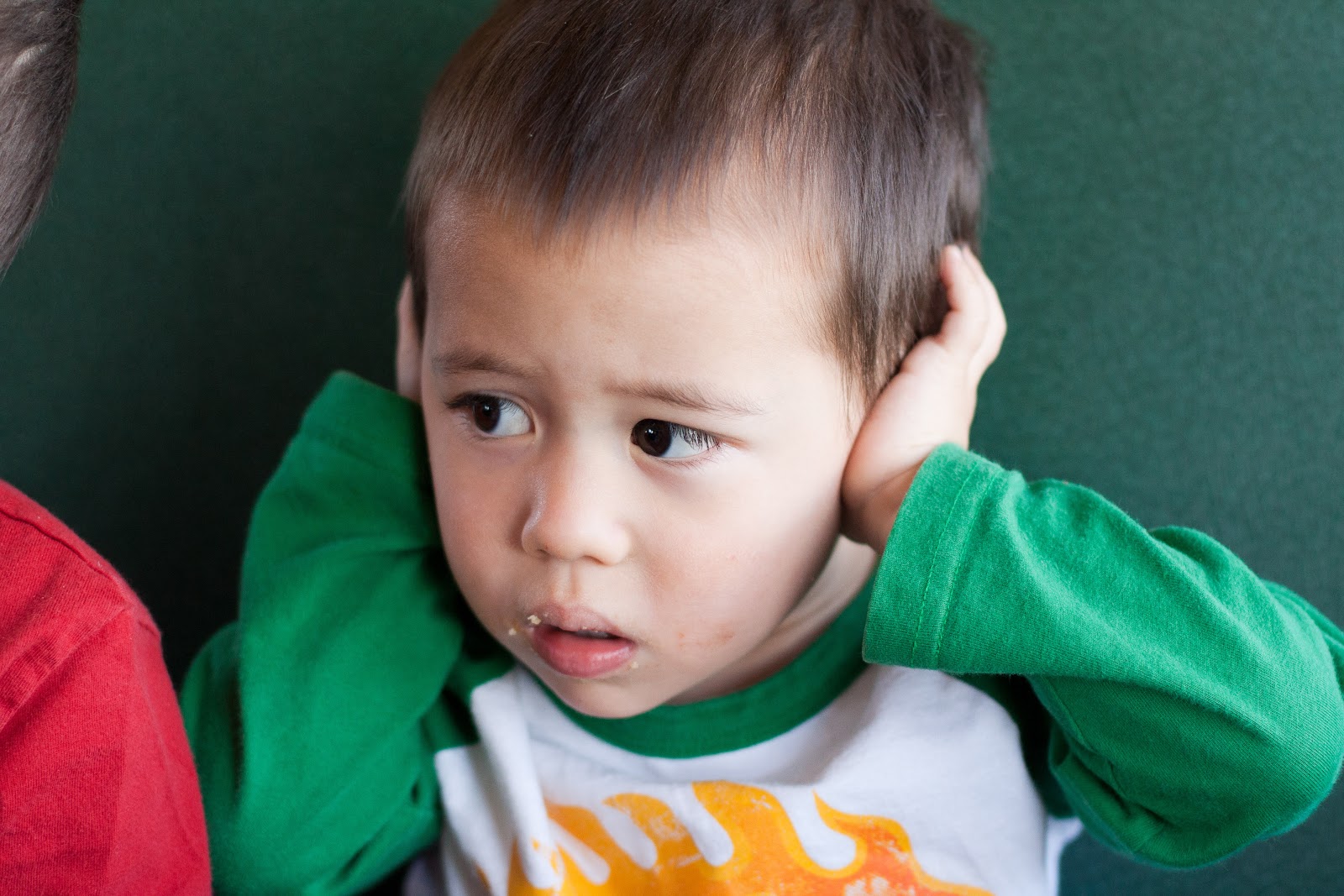 Once we left civilization behind us, everything was fine... 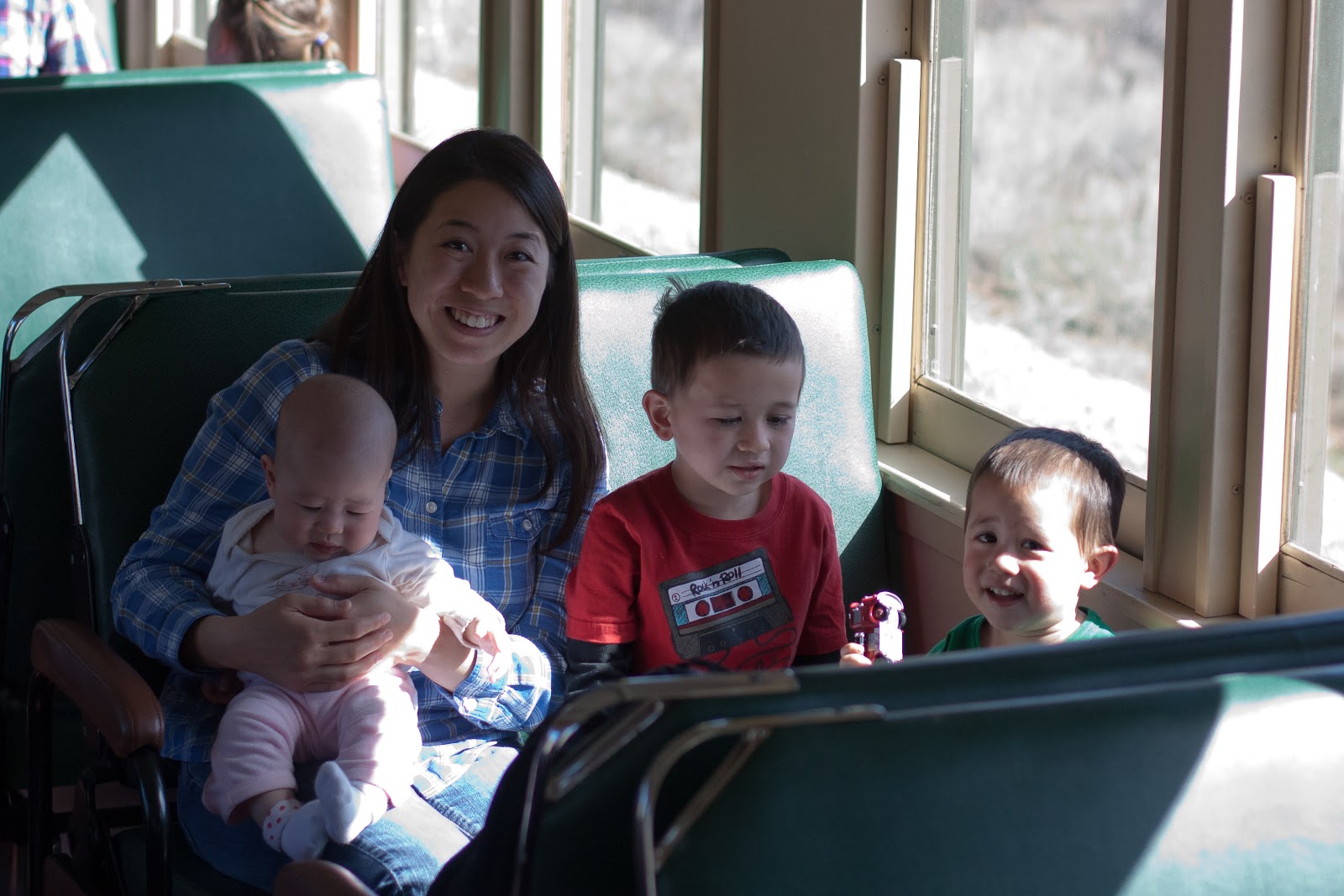 until we got ROBBED!  Yes, there was a good old fashioned train robbery partway through our ride, though the robbers were a bit confused and actually giving (chocolate) coins away to the kids as they demanded we hand over the money box.  It was a cute bit of entertainment that culminated in one of the robbers getting caught and serving her "sentence" by being our on-board entertainment.  We all had a fantastic time. (That's her in the extremely fuzzy background, and that's proof that I was on this trip in the extremely focused foreground.  Hope that clears things up for ya.) Once the train ride was over it was time to head home.  As we were driving to the freeway we passed by a park.  Out of the blue, Sammy says, "Can you drop me off at the park?"  What??  "Don't worry, I'll walk home,"  he said in a reassuring tone.  Funny kid.

Oh, and in case you were wondering, Elinor spent the majority of the trip here, doing this: 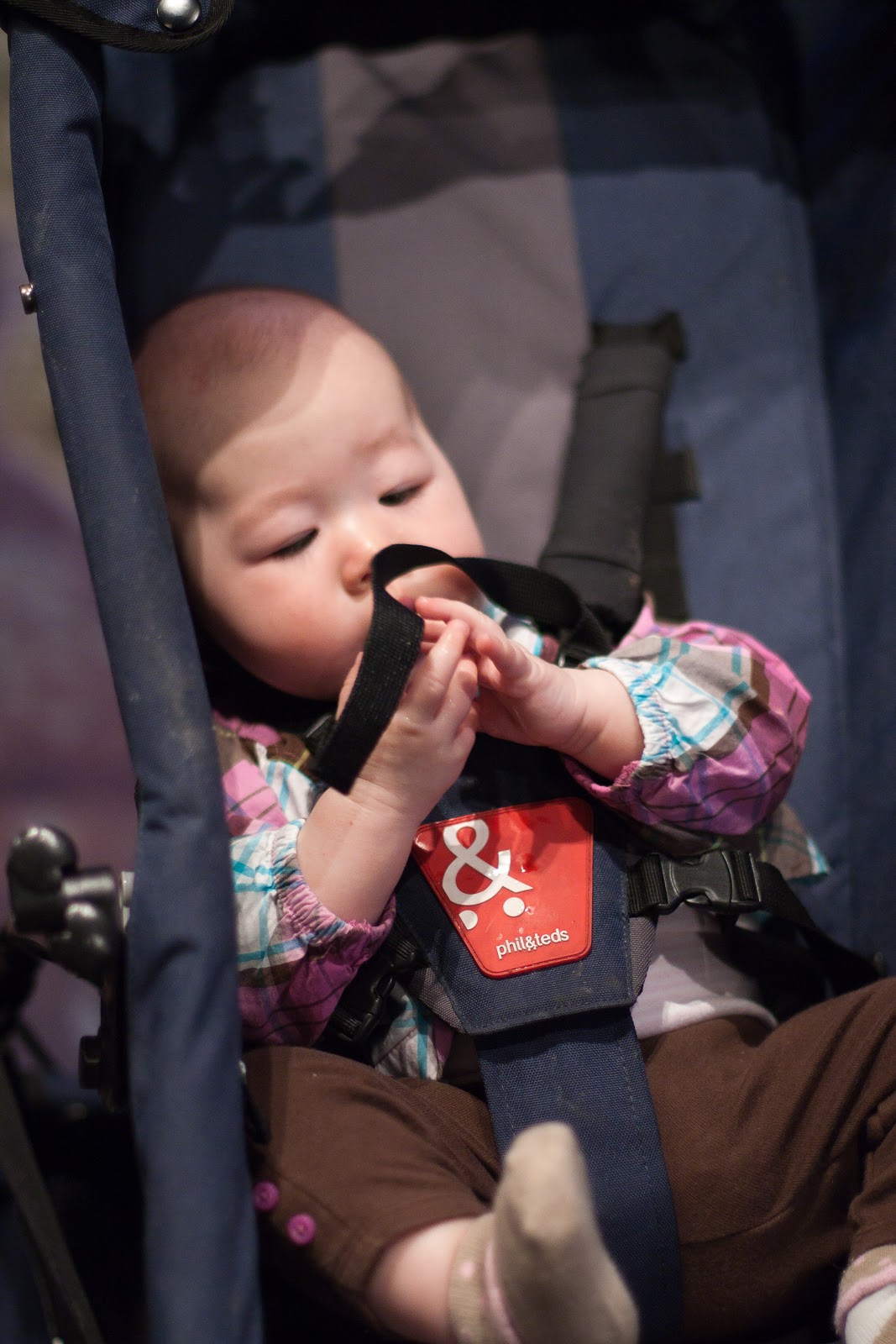